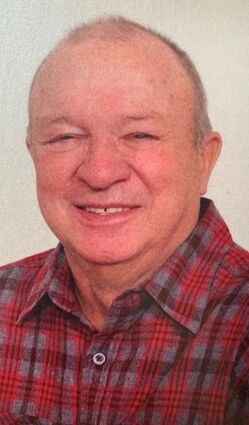 Ken attended school in Saxon and graduated in 1958. Upon his graduation, he joined the Army National Guard. He was a member of the American Legion Post 371 in Saxon.

After the service, he worked in Milwaukee for a couple years and returned back to Saxon.

On June 19, 1964, he married Sandra Mae Koski. They started planning for their life of a family and farming which began as Spring Creek Registered Holsteins and was established in 1969. He worked at the trailer factory in Ironwood and attended classes at Gogebic Community College. They settled in Saxon on his homestead and built a new barn in 1970. Ken had a passion for farming, and he loved farm life. Over the many years, they hosted thousands of local kids from area schools for farm tours and to promote the life of farmers. Ken was a board member of the Wisconsin Dairy Herd Improvement Association representing 10 northern counties. He also was a 4-H dairy leader, president of the Black and White Dairy Club and received the 1994 Distinguished Leadership Award for Dairy Herd Improvement. His motto in the barn with his herd was: "Speak to the cow as if she were a lady."

Ken also served as town chairman of Saxon and spent the last 14 years on the board of the Bayfield Electric Cooperative. He was also a member of many other local boards and committees.

Ken farmed and milked cows for 45 years and sold the cows in 2011. He truly had a passion for farming. He always said he loved farming from the day he started until the day it ended. Ken loved to tell stories and poems to his family and friends.

Upon his retirement, his favorite hobby was bringing old antique tractors back to life. He would find old tractors with trees growing up and engines froze up. He would haul them back with a trailer and bring them to the shop to start the process of getting the engines running again. Every tractor had a story behind it. He was a founding member of the Lake Superior Tired Iron Club and a member of the Northern Aged Iron Club.

Ken had a kind heart, people gravitated towards him. He was well respected by the community and would help anyone in need at any given time.

In addition to his parents, Ken was preceded in death by his wife, Sandy; son, Greg Panosso; grandson, Rick Drews; brother, Robert Clement; and sisters, Dora Carlson and Mildred Bryant.

A private Mass of Christian Burial will be held Saturday, March 13, at 11 a.m. at St. Ann's Catholic Church in Saxon for immediate family with Father Frank Kordek OFM as celebrant. Burial is scheduled for June 19, at 1 p.m. at Lakeview Cemetery in Saxon followed by a celebration of life at the farm. More details to follow at a later date. To watch Ken's funeral Mass, email [email protected] to receive a video link.

In lieu of flowers, donations can be sent to Lake Superior Tired Iron Club at 13591N Clement Road, Saxon, WI 54559.

The family has chosen McKevitt-Patrick Funeral Home of Ironwood to honor Ken's legacy of life. You can leave a condolence or a tribute at mckevittpatrickfuneralhome.com.