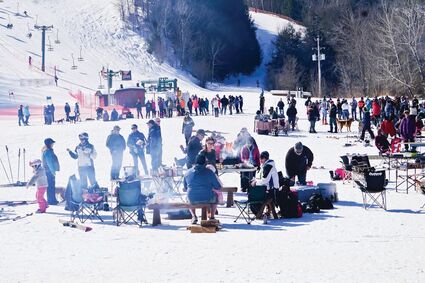 Fans hold tailgate barbecues while cheering on nearly 100 participants of the first ever Muk Up ski race fundraiser on Saturday at Blackjack Mountain.

Bessemer TOWNSHIP - The first "Muk Up" ski race event had good weather and plenty of participants and fans on Saturday at Blackjack Mountain.

"I hope they do it again next year," said Pat Orr, of Ironwood, who came to watch her adult son race. "The fresh air, the kids and the adults having a good time."

The event was named to honor the late Tony Mukavitz, who passed away in May 2020. But the ski race itself was in the planning stages for several years, said Tony's son, Cody Mukavitz, of Ironwood.

"We're hoping to do this every year," Mukavitz said. "It came together very well and everybody is having a good time."

Tony Mukavitz worked at Big Snow Ski Resort - Indianhead and Blackjack Mountains over the years, and the family used to spend their Wednesdays racing with friends at Indianhead, Cody Mukavitz said. It's been years since there has been such a competition-level event at Blackjack and the group liked the idea of creating a competition event that was also social and raised funds for youth skiing.

"It's a fundraiser for the kids," Mukavitz said. "We're just helping to make it more affordable for the local youth to enjoy ski racing."

There were 99 competitors from age 5 to people in their 60s registered as of Saturday morning, he said. There were hundreds more present to cheer them on in a giant slalom event with two runs on two courses, as they competed for the fastest combined time.

"It's fun for all," Mukavitz said. "There are a lot of very good, competitive skiers here today and there are people who are out having fun and just enjoying themselves."

A lot of Tony's friends who skied with him over the years came together for the event, said Cody, as well as Cody's generation of friends who raced together as kids.

"I am racing here with all my high school friends today," he said. "So, it's kind of a reunion for a lot of people and a lot of fun."

The community stepped up for the event with around 70 sponsors, he said. Around 15 people handled the organizing including Dan Tregembo, coach of the Team Z youth ski race team that the fundraising event supported. Team Z had their final competition in late February, but the approximately 50 team members had a chance to come out and race again on Saturday.

In addition to Team Z, the event attracted many racers from about a four-hour radius, Tregembo said. There were racers from Ashland, Rhinelander, Pine Mountain and many other areas, many of whom were former local ski league racers and high school racers from the area who moved away.

"There are a lot of fast racers here, that's for sure," Tregembo said.

The Team Z volunteers and the Mukavitz family were especially committed to organizing the event, he said.

"This is a big event for us," Tregembo said. "It's fantastic. Tony would love this. It's a really cool thing."

Matt Gabrielse was the overall winner. There were 20 category winners.