Restaurants must work to survive pandemic 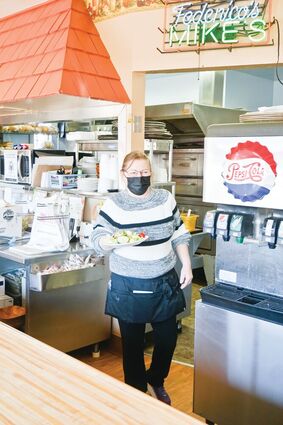 Billie Newberry, the dining room manager at Mike's Restaurant, carries a salad out of the kitchen on Friday morning. The restaurant returned to indoor dining in February after being takeout only since March 2020.

Ironwood - Whether on the highway or downtown, restaurant owners say the pandemic continues to challenge them.

Debra Federico, owner of Mike's Restaurant on U.S. 2, said she decided back in May 2020 to stay closed for indoor dining until a vaccine was developed and it would be safe and feasible for the small dining room to open. They constructed a takeout window in the interim and reopened in February with the vaccine rollout moving forward.

"It's been a year and for a lot of us it was either now or never," Federico said.

There were lean months, she said. Without the Paycheck Protection Program grant the restaurant might not have been able to open back up, she said.

The takeout service continues to work well, she said. But for Mike's Restaurant, breakfast is king as far as regular daily customers and people driving through Ironwood.

The different shutdown orders for Michigan and Wisconsin did have an impact, she said. Some customers who are comfortable and preferred indoor dining in Hurley to takeout in Ironwood.

"The playing field still isn't even because we are a border town," Federico said. "Business is a little better but our local people are still a little concerned about dining in and I can understand that. We are mandated to do a lot of special things and signatures and all of this stuff."

Toni Belmas, owner of Don & GG's Food and Spirits in Ironwood, said that as a full, indoor dining restaurant the adjustment to three pandemic shutdowns required some ingenuity. The restaurant utilized outdoor space to use a patio area that was very popular over summer, along with building a drive-thru takeout window.

Even though the restaurant has struggled through the pandemic it has taken a toll, she said. There is about $100,000 in losses that will never be recaptured, she said.

"You can't ever recover that," Belmas said.

The restaurant has tall booth dividers and she is trying to see if it will allow for seating in every booth as opposed to alternating booths. It would help make up for the loss of table space and all bar seating.

Belmas would like the state to reduce liquor and food license costs due to the loss of revenue over 2020.

"We were closed three times and weren't allowed to sell," she said.

Jason Smart, the head cook at the Breakwater Restaurant in Ironwood, said the transition to takeout orders was short-lived. The restaurant hasn't struggled, but it needs to get better, he said.

"It definitely hurt," Smart said of no indoor dining. "We couldn't stay open doing just takeouts, that's for sure. We lasted one day. It wasn't worth it paying me to be here."

The positive side is that whenever pandemic rules allowed indoor seating the customers came back, but not to pre-pandemic levels, he said. Indoor dining in Hurley wasn't a significant impact, but the day-to-day concern was with food going to waste.

It's too soon to say when the restaurant will return to its typical bustling day, Smart said. At some point during the vaccine rollout the people who haven't felt safe to come out will have confidence and that also depends on the state continuing to open up, he said.

"It doesn't take long for people to come back at all," Smart said. "But it's going to be about the same until we can seat people in every booth again."

The Uptown Café remodeled during the first shutdown in March 2020. Business returned immediately when indoor dining was allowed in June, but has been slow since the second reopening of indoor dining in February.

"I can't really say that we were affected too bad," said Darcie Carli, owner. "The second time around I was really nervous."

The transition to takeout service went well, but has picked up even more since indoor dining started again, she said.

Moving forward, Carli said she will get creative to find different ways to get people in the door. Friday through Monday business is doing well but more needs to be done for the weekdays.

The quiet days could be a lingering impact of customer flow to Hurley during the Michigan shutdown order, she said. It could also be this is a typical slow time of the year and also that others may want to receive first and second COVID-19 shots before frequenting restaurants.

"I think we'll do well once we get rid of the snow and people are traveling through again," Carli said. "The regulars also need to feel comfortable coming out."

Carli said her staff have all returned after both shutdowns and that makes a big difference in restarting without issues.

"I have a great staff," she said. "They are loyal and they are good."

Cassie Duncanson, owner of Brewster's Northwoods Bar, said she and her husband tripled sales in the first two years of business, but that the pandemic now has them wondering if they will remain open from month to month.

The latest shutdown for indoor dining meant the loss of snowmobiler visitor revenue, which is the busiest time of year, she said. She had just $400 to reopen in February when the order was lifted, she said.

"It killed us," Duncanson said. "The busy season pulls us through the rest of the year. I don't know from month to month if we're going to make it or not."

Limited funds meant restarting with a very limited liquor supply, she said. Local customers were loyal and the inventory has expanded.

Using social media to market "social distancing karaoke nights" along with other ideas will help the bar pull through, she said. But it's still a precarious situation.

The pandemic order required early closing times which meant having to close full bars on the weekends, she said. The loss of the additional three to four hours of business during peak revenue earning times has also hurt business and sends more customers to Hurley, she said.

"I need to be open all night long on my weekends," she said.

Food sales depend in part on the tavern's reputation for being the first in the area to provide trendy products, she said. The budget doesn't allow her to attend these trade shows to learn of these products and that could also hurt business, she said.

Duncanson applied for all relief grants that she was eligible for and the bar received one grant that helped the bar to open Feb. 1. Her hope is that the "mud season" between snowmobile season and summer outdoor recreation season will be short and that pandemic orders will allow her to operate without one hand tied behind her back

"We do what we can," Duncanson said. "The locals don't normally come out as much during snowmobile season and so hopefully they will come back and support. I have a good following here and I really rely on them and hope it continues."