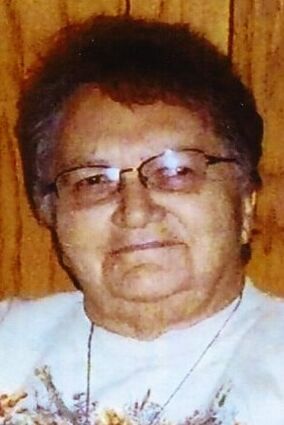 WAKEFIELD, Mich. - Mary J. (Misuraco) Wiita, 92, of Wakefield, passed away peacefully in her sleep on Sunday, March 28, 2021, at her home, with her daughter, Jean, by her side, after a brief illness due to complications of COVID-19.

Mary was born on March 2, 1929, in Hurley, Wisconsin, the 17th child of 19 children to the late Vincent and Josephine (Bruno) Misuraco. She attended St. Mary's Catholic School in Hurley and graduated from the eighth grade.

On July 25, 1953, Mary was united in marriage to Robert E. Wiita at St. Mary's Rectory in Hurley, by the Rev. Monsignor Michael Prock.

At the age of 16, Mary got her first job at the Gogebic County Infirmary as a kitchen employee. She then went on to work at the Grand View Hospital in the TB Ward as a nurse's aide. Mary continued her nurse's aide career and began working at the Gogebic Medical Care Facility when they opened in the 1950s until 1971.

In 2002, Mary decided to return to work and was employed with GOACC Nutrition. She was the site manager at the Wakefield Senior Center until the pandemic hit, and they were forced to shut their doors. She truly loved her job and the people at the senior center and meeting new friends.

Mary was a member of Immaculate Conception Catholic Church in Wakefield. She was president of the St. Mary's Women's Group for 21 years and also the St. Mary's Booster Club, where she ran the bingo located at the Father Daniel Hall, and called the bingo numbers. She participated in the Wakefield Fire Department bingo games at the Fourth of July picnic in the park.

Mary loved to play bingo and was an avid Smear player. She was known for her witty sense of humor. Mary loved everyone she met and always had a laugh or joke to share. She took pride in her cooking and baking. Her favorite recipes included biscotti, gnocchi, ravioli, respelli (Italian fried bread) and her famous cardamom biscuit which she made Easter babies for all her relatives and friends throughout the years.

She will be missed dearly by all who knew her, especially her daughter, Jean.

In accordance with Mary's wishes, cremation will take place. Due to COVID-19, there will be no funeral service.

The family would like to give special thanks to Beacon Ambulance, Aspirus Ironwood Hospital for their outstanding care and compassion that Mary received when she was a patient, Rev. Dominic Agyapong, pastor of Immaculate Conception Catholic Church, Regional Hospice, Jerald Rocco, family and friends.

Jerald J. Rocco, owner and manager of Lakeside Memorial Chapel Inc., in Wakefield, is assisting the family with their arrangements. Condolences may be expressed online at lakesidememorialchapel.com.