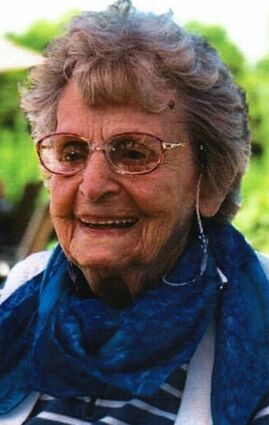 Pearl was born on Oct. 25, 1921, in Chicago, a daughter of George and Margaret (Mielke) Geyer. She attended school at Dever Elementary in Chicago.

Pearl married John E. Kauranen in 1940. They were blessed with three sons. She worked in factories and ended her working career as a florist which she loved! Pearl was widowed in 1967.

Pearl had a heart of gold and was well known for her nurturing selfless care for others. She had an open-door policy and helped many family members, taking them into her home. Pearl had an impact on almost everyone she met. She loved the Lord passionately and lived life serving others for Him.

Her favorite place to spend time, when alone, was in her flower gardens and vegetable garden. She enjoyed long walks and yoga. She loved to travel and see the world. She and her husband, Dean, were fortunate enough to do a great deal of traveling.

Pearl loved her family and so loved the little ones! She will be leaving a void in so many hearts, but we celebrate the beautiful life she lived.

She was preceded in death by her parents; her two husbands, John Kauranen and Dean Horvath; a son, Richard Kauranen; three brothers, Harold Geyer, George "Bud" Geyer and Earl Geyer; and a sister, Evelyn Graf.

There will be a memorial service planned for a later date when COVID restrictions allow.

A committal service and interment will take place at the Irving Park Cemetery in Chicago, in the near future.

Jerald J. Rocco, owner and manager of Lakeside Memorial Chapel Inc., in Wakefield, is assisting the family with their arrangements. Condolences may be expressed online at lakesidememorialchapel.com.