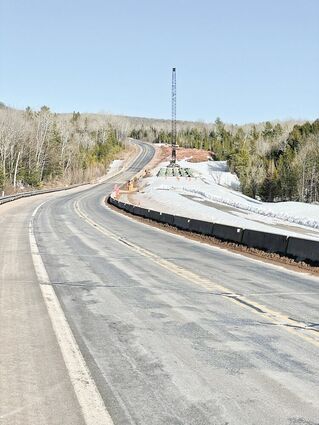 Construction was paused for the winter, as shown last month, on this stretch of M-26 in northeast Ontonagon County. Work replacing a pair of bridges over the Firesteel River is scheduled to resume later this month.

GREENLAND - The region's fickle weather can make spring a difficult time to plan construction projects in the Western Upper Peninsula, as evident by the delayed start of a bridge project in Ontonagon County.

Work completing a multi-year project replacing two bridges over the Firesteel River near Greenland had been scheduled to start in mid-March, according to a Michigan Department of Transportation announcement. However, MDOT spokesman Dan Weingarten said the project is now hoping to start next week.

Weingarten recently told the Daily Globe that one subcontractor was getting set to work but was taking a day-by-day approach to restarting operations and, while mechanics were scheduled to be on-site this week, the tentative start date for the primary contractor was April 12.

Weingarten said the delay isn't expected to impact the overall project's schedule as it's still fairly early in the region's construction season.

The $12.5 million project to replace two bridges on M-26 over the Firesteel River's east and west branches started last May, according to MDOT's original announcement, and was suspended for the winter.

"The new bridges will be built off-alignment to minimize traffic impacts," MDOT's announcement reads. "The new bridges are expected to be completed and open to traffic by fall 2021."

The project's plan calls for the demolition of the old bridges next spring.

Single-lane closures in the work site are expected to last through the end of October, according to MDOT's announcement, with one alternating lane of traffic maintained via traffic regulators.

Not only have the existing bridges reached the end of their lifespan, according to the announcement, but the new bridges are expected to be wider, safer and more efficient for drivers.