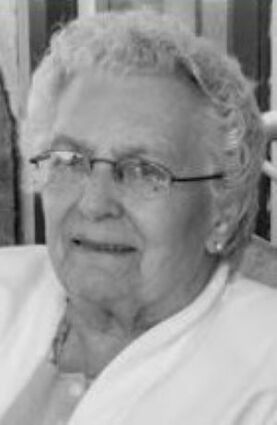 Her last day was spent restfully listening to a video of Jack playing their favorite song on the accordion, "Girl of my Dreams." This was always the first song Jack would play when he started off a set for everyone's entertainment because it was his song to his beautiful bride.

Joyce was born May 7, 1929, in Hurley, daughter of the late Charles Baron and Anna (Younger) Gustafson, and attended Lincoln High School in Hurley.

Joyce spent her days always doing loving things for her family and friends. No birthday or holiday would go by without her sending out cards to let you know she was thinking of you. Joyce was a great cook/baker and always had a good meal and dessert ready to share. She always loved having young ones around, even after her children grew up and had their own families. She would take her grandchildren whether for the weekend or daily while the parents worked.

She enjoyed walking downtown or around the old Hurley track. She also passed her time knitting and doing crossword puzzles; and while in the Villa, she loved playing bingo and getting her nails and hair done.

The family wishes to thank the staff at Villa Maria for the exceptional care and kindness extended to Joyce while she was a resident and prior to that when she would be there daily to visit with Jack.

The family has chosen McKevitt-Patrick Funeral Home of Ironwood to honor Joyce's legacy of life, You can leave a condolence or a tribute at mckevittpatrickfuneralhome.com.