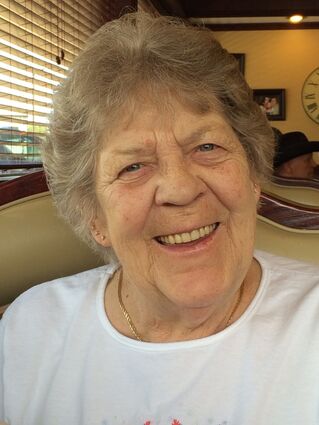 Dorrene was born on Jan. 8, 1939, in Crandall, South Dakota, to Everett and Mable (Holler) Sterling. The family moved to Jefferson, Wisconsin, in 1949. She graduated from Jefferson High School in 1957. She was married to Howard Stevens from 1957 to 1986. Throughout her life, Dorrene lived in Jefferson, Wisconsin, Mercer Wisconsin, Ironwood, Michigan, and Fort Atkinson, Wisconsin.

She was preceded in death by her parents; sisters, Janis Stammer and Marlys Gilkey; and infant son, Bobby Ray Stevens.

It's an impossible task to describe the extraordinary force that was Dorrene. Simply, to know her was to love her. When you spent time with her, her charismatic wit was sure to put a smile on your face. Her thoughtful manner and strong work ethic to which she approached everything was truly admirable. She cared for all around her, a motherly figure and support to so many. From her early days providing childcare and opening her home as a foster parent, to working with the residents of St. Coletta of Wisconsin home in Jefferson, and serving meals with a smile to the children of Our Lady of Peace Catholic Church School in Ironwood, she brought these gifts with her where ever she adventured.

During her time living in the Northwoods of Wisconsin, and Michigan's Upper Peninsula, she proudly served up many laughs alongside the entrees at Sky Lawn, Red Crown Lodge, JJ's Truck Stop, Duck Shack, and Club 51, to name a few. Visitors and locals alike would flock to the tables for an evening hosted by such a bright light. Dorrene moved back to the Fort Atkinson area in 2002, where she worked at Shopko in the pharmacy, greeting the customers with a smile and maybe one of her "Dorrene-isms." She was a funny and likable gal.

Dorrene always enjoyed an adventure, traveling many places with her young family as a devoted mother and military wife. She traveled as far north as Alaska to take in the sights and keep long distant family close. Her inner risk-taker often inspired trips to Las Vegas and local casinos alike. Despite all odds, she somehow always hit the jack pot. She loved listening to music at volumes that would make a teenager blush, with no apologies. Her daily joys included people watching, a good cup of coffee and a nibble of well-made banana bread in hand.

Dorrene was an avid reader who loved cookbooks, which she would read from cover to cover. The Food Network channel reigned on the TV, only when "Judge Judy" or "Jeopardy" was not on. Not speaking was the only option for guests when a Wisconsin sports event was on, for describing her as a serious fan doesn't encapsulate her enthusiastic dedication.

A memorial visitation will be held from 5 to 7 p.m. on Wednesday, April 14, at Nitardy Funeral Home in Fort Atkinson.

In lieu of flowers, memorials may be made to the Unity Point Health-Meriter Foundation, unitypoint.org/madison/foundation-memorial-and-honorary-gifts.aspx.