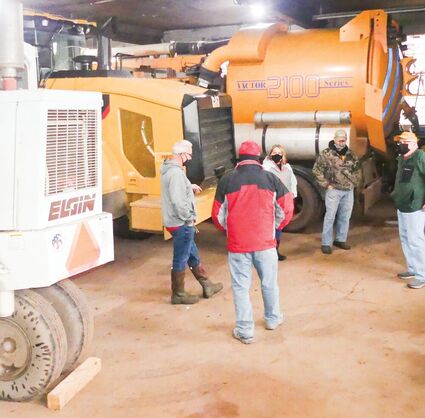 WAKEFIELD CITY officials gather Wednesday in the nearly century-old garage on Sunday Lake Street, attached to the former City Hall, which was abandoned in 2014. They were about to start a public tour of the three sites used by the Department of Public Works. The tour also included a pending new, centralized location in the town's industrial park. From left are Public Works Director Mike Sibley, Mayor Dale White, council member Amy Tarro, Public Works employee Jim Tarro and Planning Commission member Marco Movrich.

WAKEFIELD - Wakefield City officials conducted the first of four public tours of current and pending sites for the Department of Public Works on Wednesday afternoon.

A second tour was expected on Thursday afternoon, and two additional tours are scheduled for next Wednesday and Thursday at 5:30 p.m. Anyone wishing to attend should call the municipal building at 906-229-5131 to RSVP.

Wednesday's tour started at the century-old garage attached to the former City Hall on Sunday Lake Street. The city abandoned the hall in 2014, but the garage remains in u...