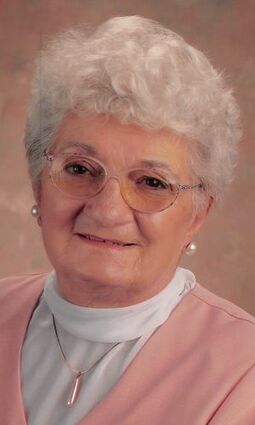 ERWIN TOWNSHIP, Mich. - The Lord has mercifully and peacefully guided Esther Maki, 89, into Heaven on April 14, 2021, taking her from her beloved home.

Esther was born Aug. 18, 1931, the daughter of Bert and Cisera Canalia, who immigrated from Italy. She lived her childhood on the family farm in Kimball, Wisconsin, where she had fond memories. There was support and friendship from her family and neighbors. Her parents purchased a farm in Hurley, Wisconsin, and moved the family. She graduated from J.E. Murphy High School and was a proud supporter of the Hurley Midgets throughout her life.

She was influenced to become a nurse after seeing a movie that depicted a mentally challenged patient being mistreated by an unkind nurse. Her goal was to heal and treat people with dignity and kindness. She chose to attend the College of St. Scholastica in Duluth, Minnesota, leaving home for the first time. She was homesick, but loved the experience of being challenged with studying and making new friends. She graduated with an RN nursing degree in 1952.

After graduation, she accepted a job at a veteran's hospital in Milwaukee. At the same time, she met and fell in love with Richard Maki from Ironwood, Michigan, and kept their communication strong by daily letters and weekly phone calls. They both kept every letter, which is bound in sequential order in a red velvet box that she shared with many of their children and grandchildren to read their love story. They married on Aug. 21, 1954, at St. Mary's Catholic Church in Hurley. Ultimately, celebrating 56 years of marriage.

They lived in Milwaukee for a short time and then moved back to Ironwood and bought a farm in Erwin Township where they raised five children.

As she raised the children, she worked at Grandview Hospital as a staff nurse in the general unit. She worked her way up to nursing supervisor of multiple departments. She then went on to be director of nursing at Hautamaki's Westgate Nursing Home in Ironwood as it was being built; Coming full circle she finished her career at Memorial Medical Center in Ashland, Wisconsin, as a supervisor, providing compassionate care for the mentally ill.

She nursed friends, neighbors, and relatives throughout her life, many of whom say she was there for them in births, sickness, and deaths. She made many friends in her career and continued to keep in touch with many of them, meeting every Tuesday at McDonald's.

Esther continued her education receiving a Masters in Theology at the age of 72! She was a devout Catholic and volunteered her time at church by writing cards, serving the sacraments, and singing in the choir. She spent time with Jesus every morning, sitting in her sunroom in prayer and walking the halls of her home every evening, saying the rosary. Esther's deep faith and trust in her Lord made the diagnosis of pancreatic cancer easy to accept.

Esther's time outside of work and church was spent tending a large yard, flower gardens, and hours of crocheting. Some of her happiest times were spent with her husband traveling in a small motorhome during the winter. She appreciated the landscape of our country but thought Wisconsin was the most beautiful of all. She commented on the trees, flowers, birds, and especially a cow sighting which reminded her of her childhood. She loved family gatherings, never wanting to miss a wedding, graduation, or any other celebration that brought the family together.

She loved dancing, especially the polka, attending festivals and church functions where music would be played. She also loved to sing and got great satisfaction from singing in the church choir. She honored the veterans of the Korean War by maintaining the local memorial for many years.

Esther took her own health seriously, with regular walks, yoga, mowing her large yard, gardening and snow removal, up until the last month of her life. She was a passionate Packer fan and followed news, politics and sports regularly.

Esther was well-loved, and it was evident by a large number of friends and relatives who reached out to her by home visits, phone calls, cards and letters daily from the onset of her diagnosis. Her final wish was to die at home in her own bed, and her family made that possible by being by her side with constant care to the end. Her two granddaughters, Veronica and Ginny, handcrafted an urn with love for their grandmother for her interment.

She was preceded in death by her husband; her parents; her sister, Nina Stumpf; and in-laws.

A Mass of Christian Burial will be held at Our Lady of Peace Catholic Church in Ironwood on Friday, April 23, at 11 a.m., with Fr. Robb Jurkovich and Fr. Binu Joseph as con-celebrants.

Interment will be in St. Mary's Cemetery in Hurley.

The family has chosen McKevitt-Patrick Funeral Home to honor Esther's legacy of life. You can leave a condolence or a tribute at mckevittpatrickfuneralhome.com