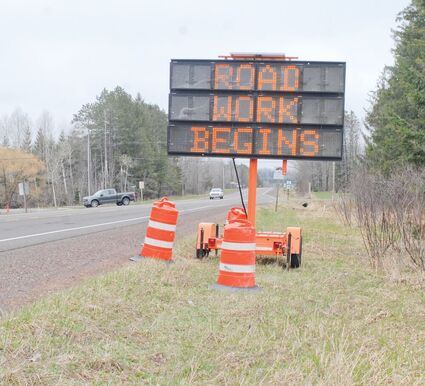 ELECTRONIC SIGNS on U.S. 2 and U.S. 51, including the one on U.S. 2 near Little Finland in Kimball, seen here Tuesday, warn drivers of the impending start of the construction project to replace the highway interchange with Iron County's first roundabout. Work on the project is expected to begin Monday, according to the signs. The Wisconsin Department of Transportation previously said a temporary intersection will be constructed to the west of the existing overpass over the course of the $3.9 million project, which is planned to run through November. Motorists should expect to encounter single-lane closures, width restrictions and intermittent flagging operations throughout the duration of the project, according to WisDOT.