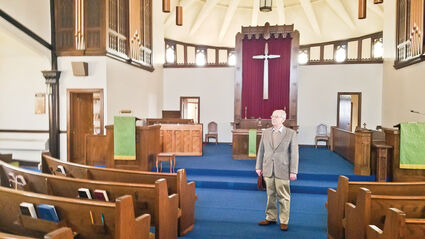 Jack Fashbaugh, pastor at First Presbyterian Church in downtown Ironwood, stands in the nave to the church Thursday morning. The congregation is folding due to a decline in membership and the building has been sold to the Faith Lighthouse.

Ironwood - Dwindling membership has resulted in the closure of First Presbyterian Church in Ironwood. The church has been in operation on East Aurora for 115 years this month.

A once thriving church with more than 300 members, in the end, the congregation counted just seven members. Of the remaining seven, two are in nursing homes and two are seasonal - retreating to Florida in the winter, said Pastor Jack Fashbaugh.

"Membership steadily declined. It had to do with the closing of the mines," Fashbaugh said. "When my wife and I first joined the church in 1992, there was already deep concern about declining membership. ... Then when I got into the pulpit in 2005, we were looking at a dire situation."

It seemed there was nothing they could do to build membership, he said. According to Fashbaugh the problem of declining membership is not limited to this congregation, but is an ongoing problem across the denomination. He said the Presbyterian Northern Waters Administrative Commission is down to 40 churches.

"Across the denomination there has been a loss in membership. The Presbyterian Church has not done especially well, and it's difficult to say why," Fashbaugh said. "Presbyterians are democratic, and one member could change the whole church with the right proposal."

He said that at the end, the secretary and himself were there on a volunteer basis and all that was left was the church's nursing home ministries. Since 1995, the parish has established some following within local nursing homes. He said that every week he would go to the local care facilities and provide a service to the residents.

"We sing old hymns. I present a sermonette and the residents seem to like it," said Fashbaugh. "That was our ministry for the most part there toward the end."

He said the nursing home ministry was shut down during the pandemic.

First Presbyterian Church was established on May 15, 1887, by Rev. D. S. Banks of Appleton, Wisconsin. He recognized the need for religious services on the Gogebic Range. Prior to the establishment of the church he conducted services in Ironwood, Bessemer and Hurley. The original church building was erected on Marquette Street on the site now occupied by the former Bethany Covenant Church. The church sold the property in in the fall of 1888 and moved to the site it now occupies on the corner of East Aurora and Norfolk streets in downtown Ironwood.

Work on building the present church structure began in 1905, and the first service was held on Easter Sunday, April 15, 1906. Fashbaugh said he believes they held multiple services as the sanctuary capacity is only about 250 people.

There have not been many changes to the century-old structure unless necessary to meet the needs of the then growing congregation, according to a church history. The basement was extended in 1951 to allow for more space for class rooms, meeting rooms and meals. A new heating unit was put in at that time, as well. The church purchased a new pipe organ in September 1954. A new kitchen was installed in 1956.

The last service at First Presbyterian Church of Ironwood was conducted on Nov. 25, 2018. Fashbaugh said he had some health issues in early 2019 that led to the end of services for awhile, and then the pandemic occurred.

The building has been purchased by Faith Lighthouse, Fashbaugh said, and they will be conducting services there starting June 1.

"It's a non-denominational evangelical church, but at least its a Christian worshiping community that will be in this space," said Fashbaugh.

Local Presbyterians can attend services in Hurley, Ashland or Manitowhish Waters, he said.

Those interested in reacquiring any gifts that they gave to the church during their membership must contact Fashbaugh by May 28 at 906-932-2751. He said that anything left will be given to Faith Lighthouse.