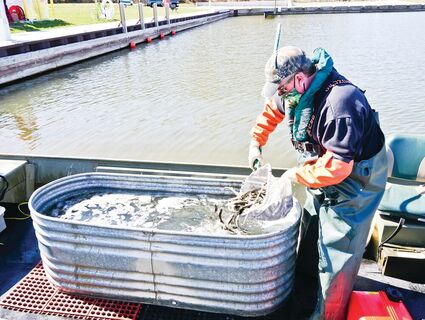 Randy Besonen, a fisheries management technician from the Wisconsin Department of Natural Resources office in Bayfield, Wis., transfers 4-inch yearling seeforellen brown trout from a truck to a boat at Saxon Harbor on Wednesday, before he and other staff in two boats released the approximately 25,000 fish into deeper water outside the harbor in Lake Superior.

The seeforellen species of brown trout were hatched at Les Voigt fish hatchery in Brule last July, said Mike Rackouski, a fish hatchery technician at the Brule facility. The hatchlings were moved to the outdoor rearing hatchery in Brule in September where they wintered and grew to four inches to be released in the spring.

Rackouski transported around 11,300 seeforellen in one truck, and a coworker transported the remaining fish, approximately 13,700, to waiting fisheries management technicians who used nets to move the fish to tanks on their boats.

The releasing team of fisheries management technicians came from the DNR office in Bayfield. They included Chris Zunker, Randy Besonen, Ross Lind and Scott Sapper, who all used two boats to release the fish to deeper water outside the harbor to better protect the small fish from gulls and other predators.

"We give them a fightin' chance," Besonen said. "Last year because of COVID, they had to pump them right off the truck."

To meet the biologist quota mark of 25,000 for Saxon Harbor the process starts with around 35,000 eggs, Rackouski said. Not all eggs will survive and there is going to be a 5% to 7% loss during the sac fry stage when the fish absorb their own belly sacks until they surface and start feeding on a manufactured diet of nutrient pellets for optimum growth.

"We've raised them for so many years now that we know on average the mortality rate is about 5%," he said. "The brown trout fishery has been phenomenal for the past few years and it seems to be getting better than ever."

The small adipose fin toward the top-rear of the fish is clipped. This allows the field surveys to estimate the survival rates and other data.

Dean Kolpin conducts fisheries surveys for the DNR at the boat landings where he talks to anglers and if they've caught brown trout he records the fish length, weight and checks for an adipose fin to see if it's a hatchery born or wild-born fish. He also tracks angler and boat numbers at the harbor to help the DNR determine the level of pressure on the area fish population.

About 90% of the brown trout coming in have a clipped adipose fin and about 10% are natural born, he said. That shows what a difference the program makes and it has made Saxon Harbor a "bright spot" on Lake Superior in terms of the brown trout returns with fishing, he said.

"So what these guys are doing is phenomenal," Kolpin said.

The brown trout programs are also stocking other points along northern Wisconsin's Lake Superior shore, he said. Bayfield County gets around 90,000 in Chequamegon Bay, and 10,000 in Little Sand Bay; another 25,000 are dropped around the Apostle Islands of Ashland County, and in Douglas County around 25,000 are dropped in at the Wisconsin Point entry in Superior, he said.

Bill Hines, owner of the nearby Harbor Lights bar-restaurant, said he is very pleased with the success of the seaferellen program. He said the longer, leaner seaferellen survival rate is much better than the heavier St. Croix trout that were previously stocked and they have migrated to other parts of the lake.

"They've been the mainstay of our fishing now for the last few years," Hines said of the seaferellen brown trout. "It's a good program."