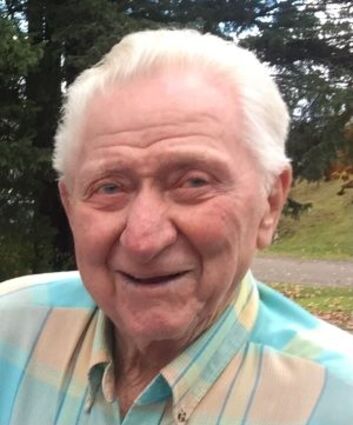 IRONWOOD, Mich. - Earl R. "Smudge" Swetkovich, 97, of Pence, Wisconsin, passed away on Sunday, May 30, 2021, just short of his 98th birthday at the Aspirus Ironwood Hospital.

Earl was born the son of Peter and Pauline (Reinero) Swetkovich on June 23, 1923, in Pence. He attended Pence schools. Earl was united in marriage to Verona Kaseno on Sept. 10, 1949, at the former St. Anthony's Catholic Church in Pence. Earl started work early in his young life, lying about his age to work at the Montreal Mine. He worked at the mine for 23 years and retired in 1962. He cut trees around high power lines for 10 years, and then was employed as an equipment operator for Iron County, retiring in 1991.

Earl was a member of Holy Redeemer Catholic Church in Pence. Earl loved working, so much that he helped build a neighboring house while on a family vacation. His favorite past times were cutting wood and working in his three gardens. Earl loved his kids and cherished his grandchildren. He was always up to share an Old Style with anyone.

He was preceded in death by his parents; his son, Michael; sons-in-law, John Herrala and Donald Mattson; brothers, John and Gerald; sisters, Esther (Albert) Baker and Madalynne Rowe; and brother-in-law, John Perich.

A Memorial Mass of Christian Burial will take place on Tuesday, June 8, at 11 a.m. at the St Mary's Catholic Church in Hurley, Wisconsin, with Father Frank Kordek, OFM, presiding. Inurnment will follow at St. Mary's Cemetery in Hurley.

The family has chosen McKevitt-Patrick Funeral Home of Ironwood to honor Earl's legacy of life. You can leave a condolence or a tribute at mckevittpatrickfuneralhome.com.