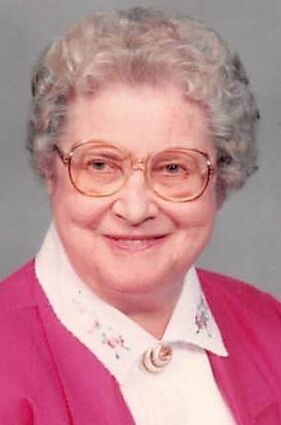 Marie was born to Andrew and Maria (Karjala) Wedenoja on May 12, 1919, in Wakefield, Michigan. She attended Wakefield schools and graduated from high school in 1937. After graduation, Marie worked at a variety store in Wakefield. During World War II she worked in Detroit in defense work and at Park Davis Laboratories. Marie was united in marriage with Elwood Sanders in Falmouth, Massachusetts, Cape Cod in 1943.

In 1963, Marie took a Licensed Practical Nursing course at the Gogebic Campus through Northern Michigan University. She worked at Grandview Hospital as an LPN from 1964 until her retirement in 1981. In 1995, Marie moved to the Minneapolis area to live with her son, George. She returned to Ironwood in 2003, and then to Little Canada, Minnesota, in 2009, and returned to Hurley in 2012.

Marie is survived by her two sons, George of Little Canada, and Ron (Ann) of Springfield, Virginia; two grandsons, Andrew of Springfield, and George II of Denver; two great-grandchildren, Jolene and Giovanni; sisters, Lynda Wedenoja and Marilyn Wedenoja; and niece and nephews, Rudy Wedenoja, Billy Wedenoja and Jeanne Wedenoja. Marie is further survived by other relatives and friends.

She was preceded in death by her parents; her husband, Elwood in 1971; and other family and friends.

The family has chosen Ketola-Burla Funeral Home of Ironwood to honor Marie's legacy of life. You can leave a condolence or a tribute at rangefuneralservices.com.