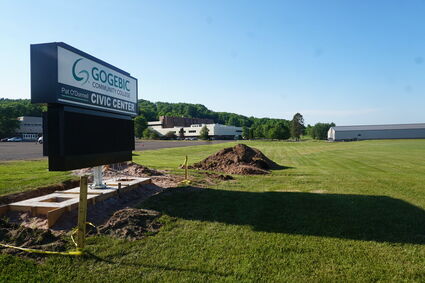 Tom LaVenture/Daily Globe A new sign on Jackson Road in Ironwood stands at the entrance of Gogebic Community College and the Pat O'Donnell Civic Center Wednesday. The college and the city, which owns the civic center, have cooperated on funding the sign.

IRONWOOD - The city could assume temporary occupancy of the Pat O'Donnell Civic Center in early July, according to reports at the Monday board meeting.

With the final list of items for contractors to revisit to complete or repair the work to complete the arena that started construction in the spring is nearing completion, according to board member reports, Dennis Hewitt, the former city assessor and building official who was involved in the construction process until his retirement in December. He is now volunteering to help the city finalize the process.

The progress paused somewhat until the insurance company determined who would be responsible for remaining work - the civic center, the contractor and subcontractors or the insurance company, he said. If all goes as planned the city will be looking to obtain a temporary occupancy permit as early as July 7, when Rink Systems Inc. is proposing to be done with its portion of the project, and  permanent occupancy to follow when the facility is considered ready, he said.

The list of approximately 240 items fills six pages. The insurer has now assigned the responsible party to each item to help speed the completion.

Going forward there are minor items and most of the work now for the civic center involves cleaning, dusting and mopping, Hewitt said. The contractors will be doing some major cleaning and removing debris, protruding concrete and other trip or safety hazards.

An ongoing seal issue with the concrete blocks in the northwest area of the building near the windows and entry area should be resolved soon, Hewitt said. A sealant was applied and if that does not work the contractor will look to other remedies, he said.

The discussion of increasing hourly and block time ice rates and building rentals led to disagreement between board members. Some including City Commissioner James Mildren wanted to keep the rates the same for a year as the post-pandemic has placed the clubs that use the facility along with the community in financial burdens.

These clubs are starting from scratch, said Jerry Gullan, board member. Keep track of rates and rentals and revisit the idea after one season in order to base recommendations.

Jim Collins, board chair, said the manager should have the authority to arrange rates with various groups based on what they want to do and how much of the facility they want to rent. He said this was the practice prior to the collapse and that the civic center was nearing self-sufficiency, which is the goal, rather than relying on the millage.

Michelle Rigoni-Sivula, civic center manager, who recommended base rates for building rentals with different sized deposits for cleanup and if the group was going to bring in alcohol. The board, without taking action, directed Rigoni-Sivula to apply the base rates for June and to place the topic on the next meeting agenda.

Marcus Re, board secretary, said that prior to the civic center collapse in 2019 the board was working on obtaining a stadium liquor license. He asked that the board revisit the plan.

The board approved a motion to budget up to $600 to Jacquart Fabric Products. The Ironwood company is designing a fabric seal to fit between the arena plexiglass and the wall as insulation.

Collins said the board is waiting on the insurance company to determine what portion of the arena floor painting will be paid by the insurer, contractor and the civic center. The construction process did some damage to the pain but not all of it, he said.

In her report Rigoni-Sivula said the graphics company is working on replacing banners for the south wall. The original banners were already old and had yellowed in storage during construction. Some of the business logos and other information has also changed, she said.

Rigoni-Sivula has been assembling the new furniture for the facility herself. She is about 75% completed with about 15 more tables and chairs to complete.

The quality of furniture is very good, solid and heavy duty, she said. The focus will then turn to cleaning and hauling items into their spaces, she said.

The kitchen and other appliances to include televisions are scheduled to arrive at the end of June, she said. The outdoor signage is going up this week, including the digital sign in partnership with Gogebic Community College at the school parking lot entrance.

Gullan said his work to place flooring in the player boxes and penalty boxes is half finished. He expects to be completed before the remaining facility finish items are done.

In other business, the board approved the annual fiscal budget to be incorporated into the city budget for approval in July.