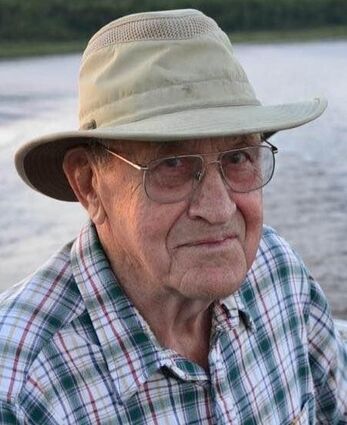 LAKE PLACID, Fla. — Bernard "Bobo" Kolesar, 95, passed into the arms of God and joined his Savior Jesus Christ on June 5, 2021, in Lake Placid, Florida, surrounded by his family.

He was born in 1925 to John and Mary Kolesar in Ironwood. Bobo was the last surviving sibling of 17 sisters and brothers. He grew up in the Norrie location and graduated from Luther L. Wright High School in 1943. With the untimely passing of their father, he joined family members tending their animals and garden while working various jobs to supplement needed funds.

Bobo loved athletic competition. Horseshoes and lawn darts replaced the weekly ping pong matches with his brothers. White pants or shirts were never a good choice for friendly badminton matches. In his youth, he perfected his basketball "set" shot, used his speed to find his place on a football lineup, and loved the chance to send discouraged hitters back to their baseball team's bench.

At 17, Bobo started his 15-year span of pitching for local range teams, church leagues, location teams, and the epitome of every wide-eyed hurler, being chosen by the Monarchs of the Interstate Baseball League while still in high school.

During World War II he worked for Allis Chalmers in Milwaukee, assembling heavy ground equipment for the Army. Between shifts Bobo played semi-pro football in the Milwaukee County Municipal League.

When the war ended, Bobo returned home. The center of his attention went beyond the pitching mound. He picked up where he left off, courting the "love of his life", Zellamae Nova Keeler. Married in 1947, they followed each other's dreams for 30 years until Zella's death.

Bobo hired on with Ironwood Fire Department in 1952. He made sergeant in 1970, captain in 1972, and was appointed chief in 1974. After retirement in 1981, Bobo set his sights on the next big fish, another brace of grouse, and pursuing deer for venison stroganoff, smoked sausage and butterfly steaks. His favorite pursuit was making an annual Christmas venture visiting his children and grandchildren.

Bobo was the driving force behind continuing Kolesar family reunions, which was a time to connect nephews, nieces, cousins, and old neighborhood friends together. Local nephews were always there to help when Bobo needed help. His one o'clock coffee buddies shared wild tales and 'advice' on various topics.

When he could get into his Chaney Lake cottage in the spring, he quickly said hello to year-round residents he might encounter. He loaded the bird feeders to keep track of migrating feathered friends returning and put peanuts and seeds out to attract his new batch of chipmunks. Their training must start early to entertain his summer visitors. He also checked the eagle's nest while looking for loon activity.

When supper dishes were done and the sun setting, he would likely spend some quiet prayer and personal time, recalling for whom and why he built the cottage. The fish could wait, the grouse chicks yet to hatch, and deer season was months away.

The family would like to thank the medical personnel of Aspirus Ironwood, Advent Health Sebring and Good Shepherd Hospice Sebring, Florida.

A Mass of Christian Burial will be held on Tuesday, June 29, at Our Lady of Peace Catholic Church in Ironwood at 11 a.m. with Fr. Binu Joseph as celebrant, preceded by a visitation from 9 to 11 a.m. Interment will follow at Riverside Cemetery.

The family has chosen McKevitt-Patrick Funeral Home of Ironwood to honor Bobo's legacy of life. You can leave condolences or a tribute at mckevittpatrickfuneralhome.com.