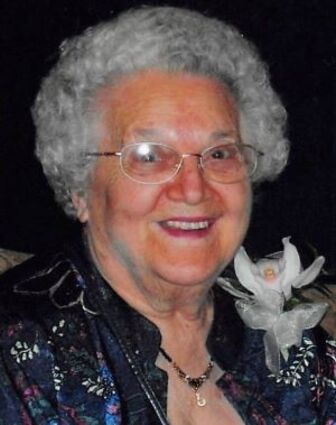 Peggy was born on June 9, 1924, in South Carey to Peter and Mary (Obert) Pedretti. She attended the Cary School and graduated from Lincoln High School with the class of 1942. She then attended St. Elizabeth School of Nursing in Chicago, graduating in 1945.

Peggy worked at the Newport Hospital and Grand View Hospital as a registerd nurse and then devoted herself full time to raising six children. She also assisted with immunizations at the local grade schools in the early 60s. In 1982 she returned to work at Hautamaki's Westgate Nursing Home in Ironwood until her retirement in 1990.

She was a devoted wife and mother. She was an excellent cook and baker with her specialties being her Italian dishes, cornish pasties, German chocolate cake, English plum pudding for Christmas dinner and always homemade bread. She baked and decorated all birthday cakes for her children. Her hobbies included reading, knitting, and painting ceramics.

Peggy loved all types of music and her home was filled with the sound of her favorite albums on the stereo and family singalongs around the piano. Her greatest joy came from attending recitals, choir and band concerts where her children and grandchildren performed. She loved to attend musical productions at Theatre North and the Historic Ironwood Theatre.

She was a devout catholic and a member of St. Mary's Catholic Church in Hurley where she was a member of the Catholic Women's Council as well as the church choir. She enjoyed taking part in the annual Christmas tea and the church bazaar.

She was preceded in death by her parents, Peter and Mary Pedretti; her daughter, Paula Rouse; her brother, Paul "Buster" Pedretti; her mother-in-law, Freda Gerry; her aunt, Annie Brown; her uncle, John Obert; numerous brothers and sisters-in-law; her lifelong friend, Ruthie Helin; and many beloved neighbors.

A Mass of Christian Burial will be held Friday, July 2, at St. Mary's Catholic Church in Hurley at 11 a.m. with the Rev. Frank Kordek OFM as celebrant. The family will receive relatives and friends from 10 a.m. until the time of the Mass.

Interment will take place at Riverside Cemetery in Ironwood, Michigan.

The family has chosen McKevitt-Patrick Funeral Home of Ironwood to honor Kathryn's legacy of life. You can leave a condolence or a tribute at mckevittpatrickfuneralhome.com