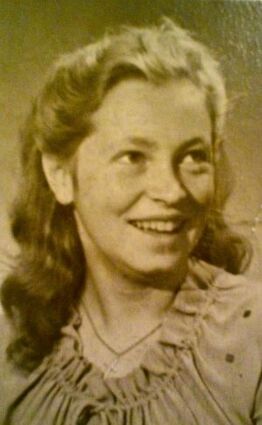 Maj-Britt was born the daughter of Leo and Irma (Lehtinen) Nyberg on Oct. 17, 1931, in Helsinki, Finland. She attended and graduated from school in Finland. After school Maj-Britt worked for a telephone company, a retail store, and the Finnish State Department.

On Aug. 16, 1953, Maj-Britt was united in marriage with John "Gil" Kangas in Helsinki, Finland, at Killion Kirkko by Rev. Kukkonen. Maj-Britt met Gil at the 1952 Summer Olympics in Helsinki, while he was on leave from the U.S. Army, stationed in Germany. He was walking around Helsinki and he saw Maj-Britt looking out the window of her parent's apartment. He asked her out in his broken Finnglish to see the African Queen [Bogart & Hepburn} at the cinema, and the rest is history.

Shortly after marriage, Maj-Britt and Gil moved to the United States, living in Beloit, Wisconsin, Marquette, Michigan, and the Escanaba area until moving to Ironwood in the 1960s. Maj-Britt managed a 1-hour dry-cleaners for two years and retired from Community Action as the head cook in nutrition.

She is survived by her husband, John "Gil"; sons, Thomas of Ironwood and John (Katie) of Montreal; daughters, Maj-Lis (Robert) Sejbl of Chippewa Falls and Maj-Ra Norsen of Kaukauna; grandchildren, Kristine (Dustin) Basom, Pamela (Dustin) Luczak and Joshua (Michelle) Norsen; great-grandchildren. Ava and Grady Bason, Annabelle and Madeline Luczak, and Ive Norsen; and her brother-in-law, Russell (Muriel) Kangas of Marquette. Maj-Britt is further survived by other relatives and friends.

A visitation for Maj-Britt will be held on Wednesday, June 30,, from 10 a.m. to 11 a.m. at the McKevitt-Patrick Funeral Home in Ironwood, with a funeral service will follow at 11 a.m. with Pastor Mike Hill officiating.

If desired, memorials may be directed to Community Action in Maj-Britt's name.

The family would like to thank the staff, and a special thank you to Carol, at Westgate Nursing Home for their care.

The family has chosen McKevitt-Patrick Funeral Home of Ironwood to honor Maj-Britt's legacy of life. You can leave a condolence or a tribute at mckevittpatrickfuneralhome.com.