Bridge over US 2 begins to come down 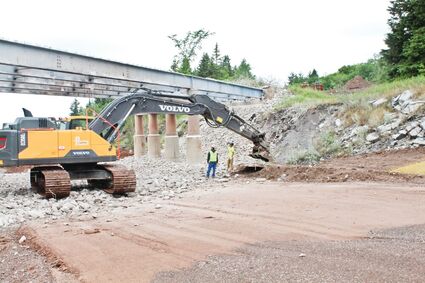 Construction crews work to dismantle the U.S. 51 bridge over U.S. 2. The bridge deck has been removed, exposing the girder. The bridge piers and the abutment on the nearby hill will be removed next, Project Engineer Eric Lundwall said.

HURLEY - Construction crews started removing the U.S. 51 bridge over U.S. 2 Tuesday to help make way for a new single lane roundabout. The work included removing the road deck from north half of the bridge.

"The north half of the bridge has to come down because we're switching traffic to the westbound lanes," Lundwall...