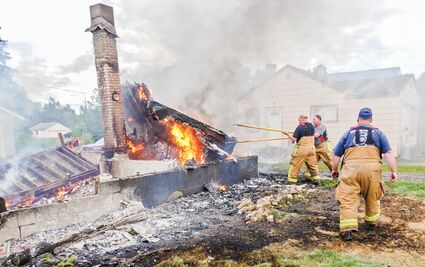 ON WEDNESDAY evening, members of the Wakefield Volunteer Fire Department monitor a controlled burn at 108 Ahola Ave., where a structure had been lost to a winter electrical fire. From left are Brian Kuchinski, Tom Zeckovich and Fire Chief Mike Singleton. The men were pushing a corner of the house walls into the fire, after which the chimney toppled. During the entire fire, the nearby house at 110 Ahola Ave. was protected by a sprinkler system.

WAKEFIELD - Members of the Wakefield Volunteer Fire Department worked on Wednesday evening to burn what remained of a city house that already had sustained a winter fire.

"It was a total loss to begin with," said Fire Chief Mike Singleton of what had been a one-story house at 108 Ahola Ave., directly north of U.S. 2. He added that the cause of the original fire was believed to be electrical.

Although two persons had been living in the home before it burned, Singleton said they had escaped from the fire and now are resettled elsewhere.