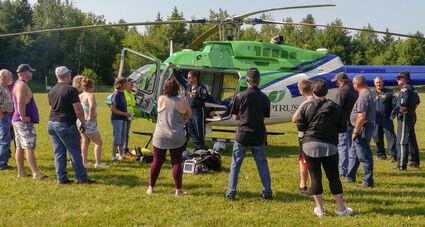 P.J. Glisson/Daily Globe MARENISCO TOWNSHIP Volunteer Fire Department members listen as Flight Nurse Scott Pupp (center with arm on helicopter) addresses them during a July 2 training regarding air transport of patients. From far right were his associates, Pilot Mike Gross and Flight Nurse Kevin Mittelsteadt. The flight team is affiliated with Aspirus Wausau Hospital, which contracts the use of the helicopter via PHI Air Medical. The training was on the old athletic field next to the former Marenisco K-12 School.

MARENISCO TOWNSHIP - Members of the Marenisco Township Volunteer Fire Department received several layers of MedEvac training in recent weeks, thanks to flight staff who work in the local region.

The most exciting component of the training occurred on July 2 when a MedEvac crew landed a helicopter on the old athletic field next to the former Marenisco K-12 School in Marenisco.

Hence, the Aspirus logo is on the helicopter, but Gross said, "It's owned and operated by PHI."

Gross said the helicopter training was intended as a "hands-on" lesson after MVFD members already had received a PowerPoint guide from the Aspirus Public Relations staff. They also received landing zone cards and patient care booklets.

According to Gross, the point of a flight team - which typically consists of a pilot, a flight nurse and a paramedic - is to provide rapidly-delivered advanced life support at the scene of an emergency and then transport the patient to the nearest appropriate facility.

For instance, he said that the helicopter could land in the field where they were responding and then transport a patient to the nearest trauma centers, which are located in Marquette; Duluth, Minnesota; or Wausau, Wisconsin.

He explained that the destination will be based on factors such as what specialty is needed versus which location is closest.

The use of the helicopter can speed transport considerably. As Gross explained, it takes them 15-20 minutes to fly from Minocqua to Marenisco, whereas the driving time is about an hour.

Even at night, Gross said they can land in places with limited lighting because the helicopter is equipped with night vision which allows them to see "really well."

The training was intended to familiarize MVFD members with the process of preparing a patient to load a helicopter.

Pupp explained that a patient - or family members speaking on the patient's behalf - can request the use of a helicopter, although he noted some limitations, as follows:

-The patient has to be able to fit in the helicopter, which has only a tight space in which to tuck its gurney. "It's like driving a Pinto when you'd rather have a Cadillac," said Pupp.

-Family members cannot fly along, even when the patient is a child or baby.

-The helicopter cannot land on water or ice.

Other challenges also may be involved, according to Pupp. When it is necessary for a helicopter to land on a road, he said that traffic must be stopped in both directions.

On some occasions, he said that when the helicopter crew cannot stabilize a patient, they must take him or her to the nearest regular hospital for stabilization before then making the transfer to a trauma center.

"The biggest thing we're doing for you people is getting them out of here fast," said Pupp, who noted that the helicopter can travel 150 mph - sometimes faster, depending on weather.

He also noted that using a helicopter is generally only about $250-$500 more for someone who has medical insurance. He added that the relatively small extra cost could result in saving life or limb.

Gross said that first responders of MVFD likely often coordinate with other emergency officials to arrange for helicopter transport, but he pointed out that they also have the option to call the MedEvac staff directly.

As Flight Nurse Kevin Mittelsteadt added, if you call them directly, you'll find out immediately if they're available.

During the Marenisco training session, MVFD cadet Alice Sturkol volunteered to act as a patient on the helicopter gurney as other members practiced tending her.

Pilot Mike Gross said that the training was provided at no cost to the MVFD. "Actually, the hospital pays for it to promote the hospital and its services," he said.

He also explained that, even as they were providing the training, they remained on call for actual emergency needs.

"We're still in service," he said.

In fact, the crew's original training scheduled for June 2 in Marenisco had been canceled for that very reason.

Right before they were ready to leave for the training, they received notice of an emergency need, and as Gross assured, "Of course, the patient flight always takes precedence."

Mittelsteadt said they hope within a year to have a bigger helicopter that could allow them to offer a ride-along program.