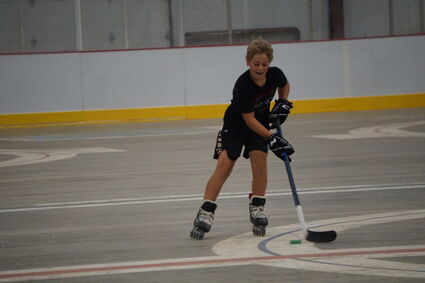 Gavin Moderson, 12, Hurley, practices his puck handling skills on rollerblades on Wednesday during the soft opening of the new Pat O'Donnell Civic Center, in Ironwood.

IRONWOOD - A first look at the new Pat O'Donnell Civic Center was too good to pass up during a soft opening on Wednesday.

"We had a very nice, steady stream of people all afternoon and were encouraged by the turnout," said Michelle Rigoni-Sivula, civic center manager.

As a former hockey parent who is accustomed to cold arenas, Jim Pawlak, of Ironwood, said the heaters above the spectator area are a nice touch.

"That is going to help us out tremendously," Pawlak said.

The "newness" of the facility stands out the most, he said. The insulated concession area where parents and players can watch...