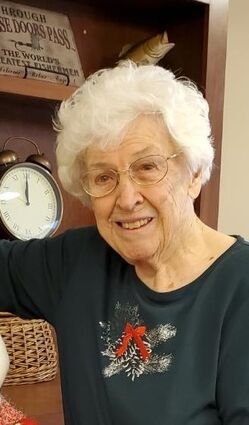 As a young adult, she moved to Milwaukee with friends and family. During World War II, she worked as a welder at Allis Chalmers Super Chargers. Her work included fabricating parts for war machinery.

In 1943, she met Clarence "Al" Crane in Milwaukee. On April 17, 1948, they were married in Ironwood. Al served with the U.S. Army Air Corps. During his military service, they lived in many different locations, including Long Island, New York, Sumpter, South Carolina, Great Falls, Montana, and Fort Lewis, Washington, to name a few. Following his discharge, the family lived in Milwaukee for several years before moving to Ironwood. They eventually moved to Ashland, where they made their home. Since December 2011, she has lived in West Bend.

As a young girl, she enjoyed winter and everything about it. She loved to ski and ice skate. Her love of the winter season carried though her entire life. She also enjoyed playing bingo no matter what was going on.

Visitation will be held on Thursday, Aug. 19, at Holy Angels Catholic Church in West Bend from 1 until 2:15 p.m. with a Mass of Christian Burial to follow at 2:30 p.m. Burial will follow in St. Mary's Cemetery (new).

Olive's family would like to extend a sincere thank you to the staff and care givers at New Perspectives. Their care, compassion and friendship is greatly appreciated.

The Schmidt Funeral Home of West Bend is serving the family. Messages of comfort and condolences may be left in an online guestbook at schmidtfuneralhome.com.