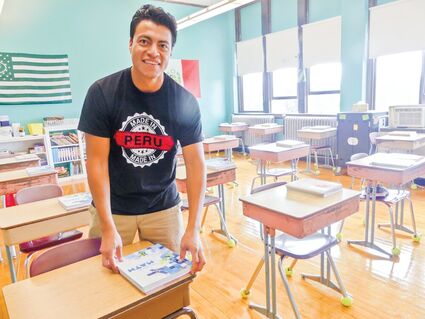 ON MONDAY morning, teacher Connor Drier stacks up textbooks on the desks of his sixth grade classroom in the Wakefield-Marenisco K-12 School.

Wakefield - One of the silver linings of the COVID-19 pandemic is that it resulted in more than one allotment of related relief funds - not only for individuals, but also for businesses and other public entities such as cities, townships and schools.

For Wakefield-Marenisco K-12 School, a major result of that federal largesse is a brand new and still growing curriculum for students.

"It's the biggest investment we've made in textbooks in a long, long time," said Superintendent Jason Gustafson on Monday. "The total is probably close to $100,000."

Gustafson said some of the books that had been in use were "easily" at least 20 to 25 years old.

Now, he said, "All of the high school math is new," along with social studies, language arts and the sciences. The same is true for junior high school students.

In addition, the elementary school has new math textbooks, with new reading textbooks expected in the following school year.

Teacher Connor Drier explained what that will mean in his sixth grade classroom on Monday morning.

On the desks of his students, who were expected to arrive today, Drier was placing this year's textbooks, which included the brand new McGraw-Hill Interactive Student Edition of "Reveal Math."

He added that the students will start with Vol. 1 of the textbook and then move on to Vol. 2.

"They're a lot more clear," he said of the new textbooks. "I think these will go a lot smoother for me and the students."

Up until now, Drier said he had been using the New York State Common Core Curriculum, which he still has in six binders on a bookshelf next to his desk.

He said that system included no textbooks for students. Instead, he would copy out work sheets for them as needed.

The new textbooks include work pages, and the same pages are shown in a reduced version in his instructor's manual, so that, in Drier's words, "I can kind of help them along."

"Math is a little confusing," he said, emphasizing that the new textbooks will help him to drive home the needed concepts of rations, fractions, percentages, etc.

Moreover, he also assured that the new curriculum still adheres to ongoing standards. "The standards are the standards," he said. "It's just how they present those standards and how they make it flow."

He uses a textbook for reading, but said that his teaching of science is based on weekly newsletters that the kids receive. Each one is on a different topic, with the example he showed based on "saving the earth."

"A lot of the time I'll do projects with the science and social sciences," he said.

For instance, across the wall were large, colorful and well-rendered maps of Africa.

Beyond that, he said of the kids, "They do a lot of presentations in front of the class."

When he has time to fit it in, he said he also teaches from the Michigan Model for Health, which explores mental, physical and emotional aspects of good health.

According to Drier, this year will be the final one in which his 20 students are assigned to a single instructor in a single room.

"They don't start to rotate until seventh grade," he said, adding that they then will rotate hour by hour under the instruction of various teachers in successive classrooms.

Drier said that one of the advantages of Wakefield-Marenisco's curriculum is that all of the elementary teachers follow a complementary curriculum "so it all flows."

Drier, who is from Montreal, is in his fifth year at the school. "It's fun," he said of his job. "I like it. It's a nice atmosphere."