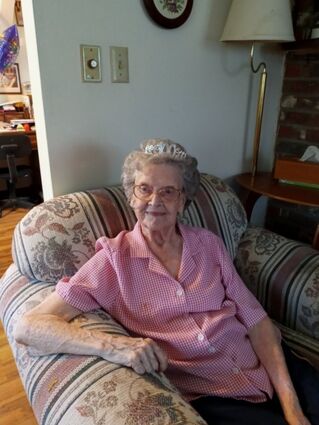 Wilma was born May 21, 1921, in South Cary, Wisconsin, to Matt and Alina Kinnunen, and graduated from Lincoln High School in Hurley, Wisconsin, with the class of 1939. After high school, Wilma moved to Milwaukee and worked in a factory that manufactured radios for American fighter planes and bombers for the war effort.

Realizing this line of work wasn't for her, Wilma enlisted in the U.S. Army. After basic training in California, she was transferred to Vienna, Austria, where she worked as a stenographer. While serving in Vienna, Wilma met Sgt. James Tucker. Wilma left the Army achieving the rank of staff sergeant. They married Feb. 14, 1948.

As James's military career took the family all over the world, Wilma was the anchor managing the home front. When James's deployments took him to countries where he couldn't take his family, Wilma and her boys always returned to Ironwood to be near family and friends. After James's retirement from the Army, Wilma worked as a guidance counselor secretary for 10 years at Wood Junior High School on Fort Leonard Wood. After leaving that position she was the regional coordinator for Older Adults Transportation Service (O.A.T.S.) Waynesville/Pulaski County for 20-plus years - a volunteer position she liked because she knew she was helping people.

Wilma was an avid reader. She did the New York Times crossword puzzle every day in under 5 minutes in ink! She had a sharp wit and a great memory for everything up until her last day. Wilma was a member of St. Paul Lutheran Church, Ironwood, Michigan, and Immanuel Lutheran Church, Rolla.

Wilma was proceeded in death by her husband, James; her parents, Matt and Alina Kinnunen; and eight brothers and sisters. She is survived by Richard Kinnunen of Iron Belt, Wisconsin, and Katherine Sandman of Wisconsin Rapids, Wisconsin; three grandchildren and two great-grandchildren.

Funeral services for Wilma will be held Friday, Sept. 17, at Waynesville Memorial Chapel in Waynesville, with visitation at 11 a.m. and services at noon. Burial will be at Fort Leonard Wood Veterans Cemetery at 1 p.m., where she will be laid to rest next to James with full military honors.