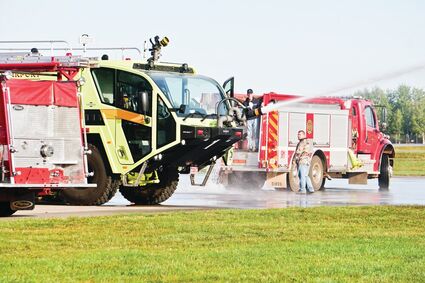 Ironwood Township - The Gogebic-Iron County Airport terminal apron was full of fire trucks on Saturday as area departments gathered to train for an airport response.

Trucks and firefighters of volunteer fire departments from Bessemer, Wakefield and Ironwood townships in Michigan, along with the town volunteer units of Kimball, Anderson and Oma, in Wisconsin, took part in the training.

The fire departments rotated turns with moving water trucks to fill a portable water storage pool to keep the airport's Oshkosh Striker 4x4 aircraft rescue and firefighting (ARFF) vehicle operating. The firefighters were familiarized with the vehicle and how to operate powerful nozzles that direct water to distant flames with greater trajectory than standard fire trucks.

The ARFF was purchased in June 2019 and is designed specifically for an airport ground emergency involving fires and even possible rescues of passengers and flight crews, Harma said. The ARFF is equipped with twin engines along with water, foam, dry chemical and Halotron 1 tanks to more effectively suppress various types of fires that can occur at airports.

The Federal Aviation Administration requires ARFF vehicles for airports with passenger carrier service and provided the grant for the $662,869 purchase cost other than $45,801 in matching funds from the airport. Airport employees double as firefighters and participate in required aircraft rescue and fire fighting training for annual certification through the Michigan Department of Transportation.

In the event of an incident the airport personnel would move the AARF to the scene of a fire and start operations until area units arrive.