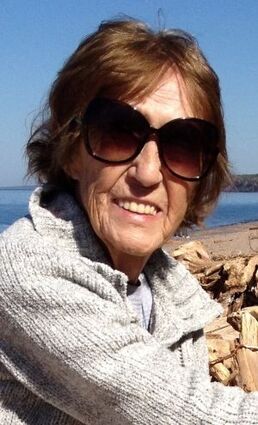 Julia, or Julie as she was known, was one of a kind and ahead of her time! She was a feminist (telling her daughters to grow themselves first before they got married), a fashionista (leopard was one of her favorite colors), a life-long Democrat (a Mother Jones subscriber and C-Span devotee), a strong Croatian woman, a singer, a dancer, a wife, a mother, a swimmer, a hiker, an acrobat, a violinist, a spot-welder during World War II, and most of all, an inspiration to all the women in the family. To know Julie was to know that family was everything to her. She leaves a legacy of a family who adores her, and even after she gave us 98 and a half years, we yearn and weep for more.

Julie was born to Frank and Ann (Jelic) Perlich on Christmas Day, Dec. 25, 1922. Though she shared this special day with Jesus, she wasted no time in making it her own. Julie was the baby in a family of six children. She grew up in the Jesseville neighborhood of Ironwood, Michigan, during a time of innocence, hard work and Croatian immigrants forging their way in America. The depression may have been right around the corner, but Julie had no idea as the family was entirely self-sufficient. They had animals and gardens to produce their own food and spirits, including wine and slivovitz. They made their clothes, including shoes as her father was a cobbler. Her mother was a midwife who once delivered a calf and a baby in the same day and was occasionally a wet nurse.

Julie had five siblings, (Frank, Myrna, Rose, Helen, and Pete), and remained close to all of them throughout their lives. She also had three siblings who died shortly after their births, as was common in those days. Her brother, Pete, died in World War II at the age of 27. The moment Julie answered the door to receive the telegram, announcing her brother's death became a story she would tell many times over the years to come; about the shock of that moment and the pain of having to read the telegram to her mother and father.

Julie married Charlie, the love of her life, on Feb. 22, 1947, and declared Charlie could not tell her a lie because it was George Washington's birthday. The love letters they wrote to each other during World War II, which she kept to this day, should be published. Charlie would often say these letters got him through the war.

Julie's children were her pride and joy. She had four daughters and a son, John, who died shortly after his premature birth. When Julie's mother died of cancer, she led the Cancer Society chapter in the Ironwood area. When her children attended Newport School, she was the PTA president and a Girl Scout leader. Her Croatian heritage inspired her to be a member of the Tamburitzas together with her Croatian cousin, friend and neighbor, Mary Nantell. The two of them would speak Croatian to each other, sharing family secrets and stories. This special relationship followed them both to the Villa Maria in Hurley where they lived out their final years under the loving care of the Villa staff. While at the Villa, Julie said to Mary, "pack your bags, I rented a truck, we're breaking out of here!"

Julie and Charlie shared a special love and joy for family that anyone who saw or knew them would admire. They loved to go for Sunday drives after church with Julie sitting next to Charlie in the front seat as if they were still dating. With the radio on and the windows down, Julie would sing as they headed out to Lake Superior or just down some country road with no purpose in mind other than being together. It always ended with an ice cream cone from the Dairy Bar in Hurley. Julie always wanted the family to be together. In fact, when Charlie wanted to golf, Julie insisted he gets a family membership and teach them all to golf, which he did. Julie was always ready to put on her favorite denim jacket, some make-up, have a few glasses of wine, and go out to dinner. She also loved dancing around the living room with Charlie or cramming 20 relatives around the tiny kitchen table for a rambunctious game of poker and cocktails.

The family was devastated when Charlie passed away from cancer in 1988 at age 64. Julie was still too full of life to be alone but insisted she'd had the best husband and would not settle for another. She reconnected to friends, played bridge, golfed, traveled and devoted her love to her daughters and grandchildren. Her grandchildren adored her and the feeling was mutual. Many a fight occurred over who would get to sleep with grandma when she came to visit. She became the subject of many "who do you most admire" school papers. While other grandmas cooked and cleaned, Grandma Julie would show off to her grandchildren doing cartwheels and splits. She hiked, practiced yoga and swam well into her 90's. She had a backstroke high-kick that took your breath away. Shopping was also one of her favorite activities and everyone commented on her love of animal prints and her collection of colorful berets!

Julie was independent-minded, making choices for herself that few women from that era dared. She formed her own opinions and wasn't shy about sharing and debating them. She encouraged her daughters and grandchildren to be independent with their own opinion and point of view. She leaves a legacy of strong women and men.

While the family grieves her passing, they know they are infinitely blessed to have had her in their lives for as long as they did.

A Memorial Mass will be held at St. Mary's Catholic Church in Hurley, Wisconsin, on Saturday, Oct. 9. Family visitation will begin at 9:30 a.m. followed by a mass at 11 a.m. A procession to the Riverside Cemetery will follow, concluding with a celebration of life luncheon at the Elk & Hound.

The family has chosen McKevitt-Patrick Funeral to honor Julia's legacy of life. You can leave a condolence or a tribute at mckevittpatrickfuneralhome.com.