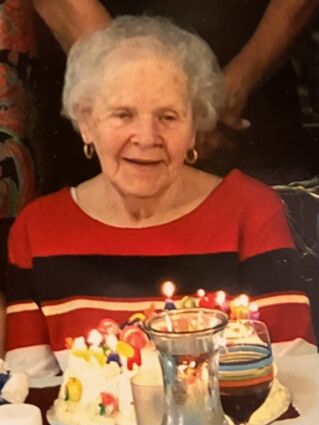 She was born June 25, 1930, in Bessemer Township, a daughter of John G. and Elizabeth (Longhini) Ulasich. She was a 1948 graduate of Luther L. Wright High School in Ironwood.

Over the years, Joanne worked as a clerk at Supervalue in Bessemer, as a secretary at Luther L. Wright High School and waitress at Don & GG's.

She had attended Lake Superior Christian Church while she resided in Gwinn.

Joanne is survived by her children, Donald J. (Linda) Hoffner of Coldwater, Michael H. (Bonita Anderson-Hoffner) Hoffner of Quincy, Mark Hoffner of Bessemer, and Donna (Jim) Smiljanich of Gwinn; 11 grandchildren, 21 great-grandchildren and seven great-great-grandchildren; and many nieces, nephews and cousins. She was preceded in death by her parents; husband; a sister, Marianne Stancher; and a brother, Matthew Ulasich.

A memorial service will be held in the summer of 2022 and will be announced. Interment will take place in Hillcrest Cemetery in Bessemer.

Canale-Gwinn Funeral Home and Cremation Services is assisting the family where memories may be shared at canalefuneral.com.