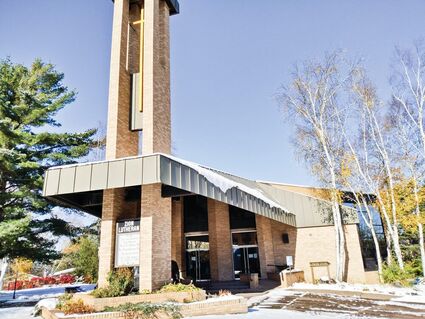 Zion Lutheran Church stands on East Midland Street in Ironwood. The church is celebrating its 125th anniversary on Nov. 13 and 14 with services by Pastor Nicole Hanson-Lynn, music by guest organist Chris Forslund and meals after worship.

Ironwood - Zion Lutheran Church in Ironwood will celebrate its 125th anniversary Nov. 13-14. The church will have services by Pastor Nicole Hanson-Lynn, music by a guest organist and meals after worship.

The celebration will start on Saturday, Nov. 13, with a 5 p.m. service. After worship, there will be a pizza and salad dinner and a screening of a film. The church will show a recording of "Workers in the Vineyard," a play written and performed by the parish in 1996 for the church's 100th anniversary.

On Sunday, Nov. 14, the church will have 9 a.m. service. Hanson-Lynn said that, in addition to all the things that the church ordinarily does in worship, they will acknowledge some of the history of the congregation through prayer.

Furthermore, Ironwood native Chris Forslund will serve as guest organist at the Sunday service. Forslund began playing at church services at the age of 10 and during his 37 years of active playing, he served numerous congregations in the Midwest and Pacific Northwest.

Forslund also conducted organist workshops and performed concerts including notable instruments in Notre-Dame and St. Sulpice in Paris, France. Forslund continued to serve at Zion Lutheran and Trinity Lutheran as a guest organist whenever he was in the area, and he was one of several organ enthusiasts who conducted the original restoration on the famous Barton organ at the Historic Ironwood Theatre in the mid-1980s.

Forslund retired from both his professional and musical careers in late 2013, but he will play at the Sunday service. He said that the 1968 Johnson pipe organ at Zion is one of the very best on which he has played and looks forward to every opportunity he has to do so.

After worship on Sunday, there will be a turkey dinner. Hanson-Lynn said that people who want to attend should call and RSVP, so the church knows how much food to prepare. The phone number for Zion Lutheran Church is 906-932-1320.

The old church was located on the corner of Ayer and Curry streets, but the congregation moved to its current church building on 100 E. Midland Ave. because they outgrew the old church.