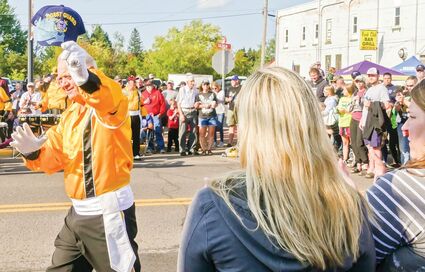 WAVING HIS Coast Guard cap during a performance of Marty's Goldenaires on Sept. 4 is Ron Rundell of Bessemer. The event was the Hurley Heritage Festival on Silver Street.

BESSEMER - "Patience" was the first word out of Ron Rundell's mouth when asked what he learned from the U.S. Armed Forces.

But the Bessemer resident also was quick to add, "You learn, of course, discipline and teamwork and flexibility in any situation."

Rundell should know, as he served not only in the U.S. Coast Guard but also in the Army National Guard.

He took time last month to explain his history in an interview with the Globe. He also shared the source of his inspiration to join the Guard in the late 1960s.

"I had an uncle that was in the Coast...