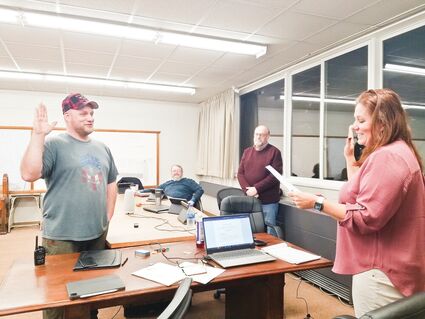 New Wakefield City Councilman Mike Zeckovich is sworn in by city clerk Sue Ahonen after being voted in by the council on Monday evening. Councilman Jim Anderson, left, and Mayor Dale White can be seen in the background.

WAKEFIELD - Mike Zeckovich was selected to join the Wakefield City Council during a special council meeting on Monday night.

Zeckovich will replace Amy Tarro, who resigned shortly after being re-elected last month but never took the oath of office.

During the special meeting, Zeckovich and another candidate for the seat, Carrie Braspenick, were interviewed individually by city clerk Sue Ahonen in front of the council. By a flip of a coin, Braspenick went first. The candidates were each asked to respond to the same series of questions about how th...