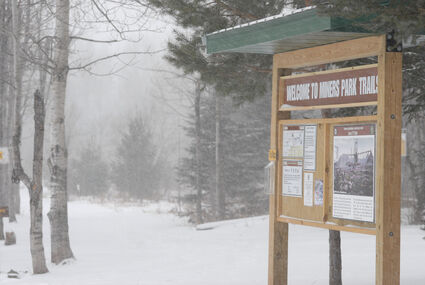 The Miners Memorial Heritage Park trail is snow covered as more snow falls Tuesday morning at the trailhead on Ayer Street in Ironwood.

IRONWOOD - The Friends of the Miners Memorial Heritage Park will host their 10th annual Candlelight Snowshoe on Monday from 6 to 8 p.m.

The event starts and ends at the Aurora Club at 101 Penokee Road, a change in location from previous years that will provide a comfortable place to gather before and after, according to spokesperson Mike Ivey.

Participants of all ages are invited to hike, snowshoe or cross country ski along a one-mile section of candlelit trail in the Miners Park. There will be some snowshoes available to borrow if needed, according to Ivey.

"From raising money for a new garage for grooming equipment to working with the Aurora Club on the snowshoe event, this has been a great year for us," says Rick Semo, president of the Friends of the Miners Memorial Heritage Park. "Getting a lot of early season snow has only helped get winter lovers out to enjoy the trails."

The Candlelight Snowshoe is not a group start. People can simply show up and go any time between 6 and 8 p.m. Treats, hot drinks and a warm fire will await at the Aurora Club.

For the Friends of Miners Park, the biggest accomplishment in 2021 was the successful move of a 900-square foot garage donated by Sam and Anne Davey, said Ivey. The heated garage is now located off Ayer Street and is used to store equipment used to groom the ski trails and maintain other trails in the park.

More than $10,000 was raised via private donations to help facilitate the move of the garage to its new location, according to Ivey.

"A new maintenance facility for MMHP is key to long-range plans for a public access trail running north from ABR through the Miners Park eventually connecting to the Iron Belle Trail which continues east toward Bessemer," said Ivey.

Other highlights in 2021 included the "Art in the Park" display which was part of the inaugural Emberlight arts festival. Volunteers also continued to make improvements to the new South Pabst Trail which adds another kilometer to the 5K groomed ski trail system, according to Ivey.

"Things just keep getting better and better at this gem right in the heart of Ironwood," said Carol Erickson, secretary of the friends group.

Established in 2010 at a former iron ore mining site, the 167-acre Miners Memorial Heritage Park features 5 kilometers of regularly groomed cross country ski trails along with snowshoe and hiking trails. The park is part of the city's parks system.

The Sisu Ski Fest racecourse also uses a portion of the MMHP trail system on its route from ABR Trails to the finish at the Downtown City Square in Ironwood.

The entire park features 14 kilometers of multi-use trails open year round. New mountain bike trails are being developed and could be ready for use by next summer, said Ivey.