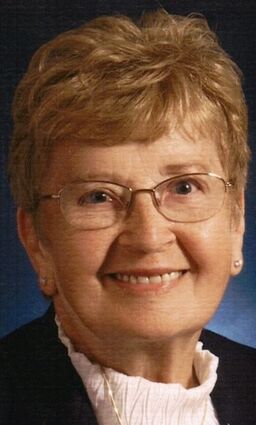 Dolores was born on Feb. 13, 1930, in Highbridge, Wisconsin, (Bass Lake, Wisconsin), the daughter of Mathias and Femmie (Hakala) Utto. Her mother died when Dolores was four years old and she was raised by her loving father.

Dolores attended a one-room schoolhouse during her early education and graduated from Ashland High School in Ashland, Wisconsin, in 1947. She attended Northland College in Ashland, where in the fall of 1947, she was the homecoming queen. Dolores transferred to Suomi College in Hancock, where she sang in the choir and earned a business degree.

Dolores worked as a secretary for her father until she married her husband, Donald J. Rostollan, on June 25, 1950. Her husband finished his bachelor of science degree in education at St. Olaf College in Northfield, Minnesota.

The couple lived in Iron Belt, Wisconsin, for one year. Then, they moved to Parkers Prairie, Minnesota, where she continued to be a stay-at-home mom to their three sons.

In 1964, the family moved to Waukesha, Wisconsin. Dolores began working as a bank teller at a drive-thru. She continued to research job opportunities in the area. Dolores decided to take a job as a guidance department secretary at the Brookfield Central High School. She held that position for 20 years and retired in 1993.

In 2000, the family moved to Wakefield. Through the years, she and her husband enjoyed traveling to see their sons and their families. They also traveled a lot in the United States, especially the southern and western parts.

She was an active member at All Saints Lutheran Church, where she participated in quilting, a circle, WELCA, helped with an outreach communion program and was a greeter.

Her condition worsened after an automobile accident in October 2016. She was admitted in November 2016, to the Gogebic Medical Care Facility in Wakefield.

Dolores is survived by her devoted and loving husband of 71 years, Don; three sons, David, Daniel and Donovan; seven grandchildren; 12 great-grandchildren; and many other relatives.

In addition to her mother, she was preceded in death by her father; and many aunts and uncles, including a special aunt, Hilda "Tatti."

A funeral service will be held Monday, Jan. 3, 2022, at 11 a.m., preceded by visitation at 10 a.m., at All Saints Lutheran Church, with the Rev. Kay Richter officiating. For the safety and health of Dolores' family, we kindly request that all guests wear a mask throughout the service.

Pallbearers will be her sons, grandsons and a friend.

A luncheon will be served at the Wakefield Veterans of Foreign Wars Post 9084, 107 E. U.S. 2, following the service.

A committal service and interment will take place at Mount Hope Cemetery in Highbridge, in the spring.

Memorial contributions may be made in Dolores' memory to All Saints Lutheran Church, 1202 Putnam St., Wakefield, MI 49968.

A special thank you to the staff at the Gogebic Medical Care Facility for the compassionate care they gave to Dolores.