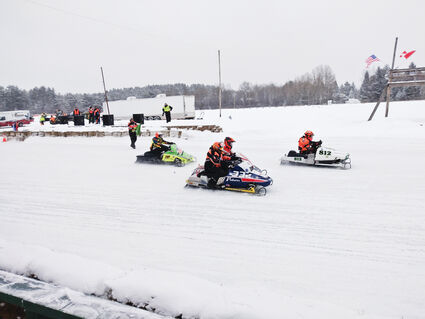 Snowmobiles blast off the starting line of the Gogebic County Fairgrounds track in one of the 52 races held on the first day of the Ironwood Snowmobile Olympus on Saturday. More races are scheduled for 9 a.m. to 5 p.m. on Saturday and Sunday for the second weekend of the Olmypus, including USSA Prostar racing action.

IRONWOOD - Despite arctic temperatures on Saturday, many racers and enthusiasts came out to attend the first day of the Ironwood Snowmobile Olympus at the Gogebic County Fairgrounds.

Event organizer Greg Basom said the first day of the races went well and that they managed to fit all 52 of the scheduled races in. He said that there were no incidents, no racers had to drop out and with such low temperatures, there was no danger of the ice on the track melting.

The races on Saturday featured vintage snowmobiles from 1985 and earlier. Among the vi...