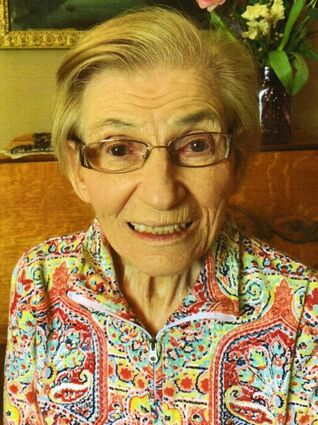 WAKEFIELD, Mich. - Dessie Dossetto, 92 years young, a longtime resident of Wakefield, passed away peacefully surrounded by her family in Novi, on Thursday, Dec. 16, 2021.

Dessie was born on Aug. 1, 1929, in Wakefield, a daughter of Milan and Jelena Popovich. She graduated from Wakefield High School in 1947.

On Oct. 14, 1950, Dessie was joined in marriage with John Dossetto. They made their home in Wakefield, where they raised their four children.

Dessie was preceded in death by her parents; her husband; a son, Richard Dossetto; her daughter-in-law, Ginger Dossetto; two brothers, Robert Popovich and Steve Popovich; and her sister-in-law, Joan Tyack Popovich.

Dessie loved her hometown of Wakefield, and was an avid outdoors person. She enjoyed cross-country skiing and had a trail named after her at the Milje Cross-Country Ski Trails named "Dessie's Run." She took great pleasure walking with her friends and neighbors and very specifically one neighbor and his dogs. They would walk by her house at 5:30 a.m., where Dessie would join them almost every morning. One of Dessie's goals was to walk across the Mackinac Bridge and she was so happy to be able to accomplish that.

Dessie's family would like to express their deep appreciation to Greg and Domicella Yon for their kindness and assistance and to Jerald Rocco, owner and manager of Lakeside Memorial Chapel Inc., in Wakefield.

A private interment will be held at the Lakeside Cemetery in Wakefield, in the spring.