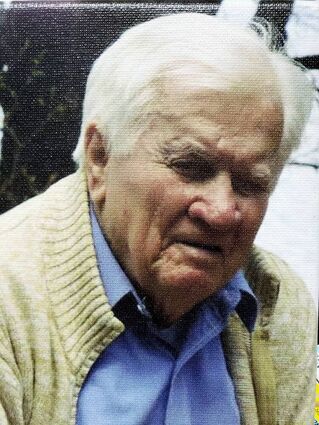 Throughout his entire life, Tom told stories, shared memories, and provided historical and area family knowledge to all who would listen. He was a human encyclopedia.

Born to Swedish parents, August and Sophia Nordine, on June 16, 1919, Tom was the youngest of 10 children being born a few minutes after his twin brother, Bernard. He was born and raised in Golden Glow, a suburb of Kenton. As a youngster he struggled with stuttering problems, but managed to overcome them graduating from Kenton High School. He always said overcoming stuttering made him more determined than ever and probably drove him to succeed. He lived by the mantra: "Don't let others determine who you are and what you accomplished."

The 1940s set the ground work and instilled principals that were part of his life until the day he died. The 40s brought logging, marriage, the Masons, Logging Congress and the first grocery store into his life. At age 21, he started a one-man logging operation after working for his brothers. He liked being his own boss. He gradually expanded his logging business lumber camps to north of Kenton and in Matchwood. Among the 40 lumberjacks who lived were characters like Greasy Pete (the cook), Slivers, Black Tom, and Doc Savage. While in his 20s, Tom became the youngest member of the Logging Congress Board of Directors. He attended the annual event faithfully. His nephews, Russ and Jim Nordine, aided him in attending the Logging Congress Expo until Tom was in his mid-90s.

In the 1960s, he left the logging business and moved into the grocery business. His original store was opened in Bruce Crossing in 1948. Eventually, he operated grocery stores in Ewen, Bergland and Watersmeet. The family still owns the Watersmeet store.

Tom was community minded and involved in county and local government. He served on the Ontonagon County Board of Commissioners and was the Stannard Township supervisor for 15 years. Among many of his accomplishments were planning the Ontonagon Long Care Facility, the sewer system in Bruce Crossing, and providing jobs to many from nearby towns. His crowning political glory was being named as an alternate delegate to the 1960 Republican convention in Chicago, where he met and shook hands with Richard Nixon. A photo of him and Nixon is still proudly displayed in the Nordine household. He was a lifetime member of the Masons and a Shriner. He was an active member of the local Masonic Lodge throughout his life donating and contributing to their mission. As a Shriner, he was most proud that his five brothers and himself were members at the same time.

In 1941 while attending the Newmans Grove, the local dance hall, he had a chance encounter with Seere Huhtala, an accountant at the Co-op Store. After pondering whether he had the gumption to ask her to dance, he made the trip across the dance fearing rejection. And viola! She accepted and they ended up getting married in 1942. They shared 72 years of marriage and had six children. They moved into their lifelong home in Bruce Crossing, which was incidentally Seere's elementary school which had been moved there.

Tom loved people and could always be counted on to tell a tale or two, or to give you the history on something and-or someone. If you wanted to know about the Matchwood Tower, Victoria Dam, White Pine Copper Mine, etc., he could tell you the who, what, when, where and why of almost everything. He had an incredible memory and recited details with amazing accuracy. He was able to share with an aide at long term care about her family's history three generations back. She was astounded that Tom knew so much about her family. Tom was quick witted, had a very dry sense of humor and loved to play on words. His favorite response at the dinner table when someone made a statement was, "You butter believe it!"

Somewhere along the way he was nicknamed "Bashful Tom." If you knew Tom, you knew that he was far from bashful. One of his greatest highlights was his 100th birthday party. Tom was lucky enough to celebrate his 100th birthday in the community that he loved. More than 200 people attended at his former Bruce Crossing store now known as Twilley's. He was in his element and talked about his 100th birthday celebration all the time when visiting him in the Long Term Care Unit. Standard Township awarded him with a lifetime service award. In addition, he received a special tribute from the governor which was presented to Tom by a member of the Michigan House of Representatives.

His final five years, he spent at the Long Term Care Units in Ontonagon and Wakefield. He adapted to his new surroundings extremely well and continued to entertain others until the end. He had many visitors and was extremely thankful for assistance he received from the staff at the facilities. Our family is also very grateful for the wonderful care he received from the staff. His passing seems like the end of an era. He was blessed with excellent health throughout his life, was seldom sick and never took medication.

Tom is preceded in death by his wife of 72 years, Seere; and two of their sons, Daniel (Digger) and Jeff. A memorial service will be held in Tom's honor in the spring.

In lieu of flowers, the family requests that Tom is honored by donating to Sonco or any local charity or by performing an act of kindness - a phone call to someone who is alone, shoveling a sidewalk for those who can't, driving someone to an appointment. Kindness makes for a strong community. Tom was all about community and would like to be remembered for that.

May he rest in peace.