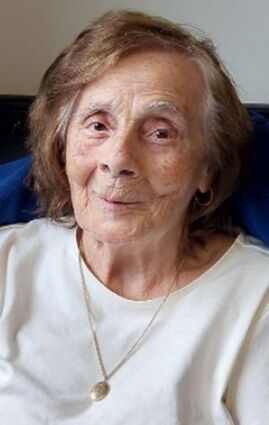 BROOKLYN PARK, Minn. - Frances Lupino (nee Faggiana), 95, was called to Heaven peacefully on Jan. 16, 2022, at home and surrounded by family.

She married John Lupino on June 20, 1959, in Sicily and joined him in America in November of that same year. They resided on the family farm in Kimball, Wisconsin, and later moved to Hurley, Wisconsin, where they remained their entire marriage. Frances relocated to live with her daughter in Maple Grove, Minnesota, in 2020.

After losing her husband in 2002, Frances began volunteering at the Hurley Senior Center and was a staple there for 18 years. Frances called the people at the Senior Center her second family. She was very proud of her service and dedication to the center. It became her second home.

Family was the most important thing in Frances' life. She cherished every moment with her kids, grandkids and great-grandkids. She carried around pictures of them in her wallet and often bragged to those she met. She was a proud grandma.

Frances was a devout Catholic and was a member of St. Mary's Catholic Church. She prayed her rosary every day, and always prayed for her family and friends.

Frances will be missed greatly by all who knew her.

Frances was preceded in death by her parents, two sisters, a brother, and her husband, John Lupino.

The family would like to extend a special thank you to Frances' neighbors, Paul and Joyce Mullard, who watched over her for many years, and to everyone who worked at the Hurley Senior Center for all the special attention you gave to her. It was Frances' special request that it be known that the Senior Center held a very special place in her heart. Finally, thank you to Hospice and Hope's Residence for the final care Frances received.

A Mass of Christian Burial will be held on Friday, June 3, at St. Mary's Catholic Church in Hurley with burial to follow at St. Mary's Cemetery. A service notice will follow.

The family has chosen McKevitt-Patrick Funeral Home of Ironwood to honor Frances' legacy of life. You can leave a condolence or a tribute at mckevittpatrickfuneralhome.com.