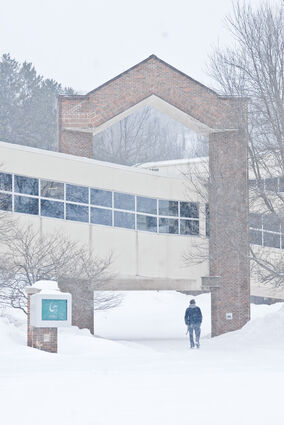 A student walks to class on the campus of Gogebic Community College in Ironwood as snow falls Thursday morning. The region was at 95.8 inches of snow, measured at 7 a.m. Thursday, before the morning's snow quall began.

IRONWOOD - The Gogebic Community College Board of Trustees heard Tuesday a report from six students that attended the National Council on Student Leadership through the college's TRiO Student Support Services program in Orlando, Florida, this past November.

"The essay winners each wrote compelling pieces on the qualities and characteristics of great leaders," according to a release from the college.

The board also heard a marketing update from Director of Admissions, Marketing and Community Relations Kim Zeckovich and Marketing Strategist Kari Klemme. They told the board about a continuing contract the college has with Interact Communications, a marketing firm in La Crosse, Wisconsin, which assists with video production, photography and some graphic design.

"A team from Interact came on site in late September to capture over 500 photographs to be used in our marketing materials and took video footage for two new commercials that will soon be airing and streaming both locally and regionally on TV and mobile devices," said Zeckovich.

The board also heard that a billboard on U.S. 2 near Jackson Road in Ironwood Township will be updated to feature the Ski Area Management program. The college continues to utilize other billboards in central Wisconsin and Minnesota near the Twin Cities.

Klemme presented comparison data of the college's social media reach within a three-month period from August to December 2021.

Facebook reach has increased by 89% with a 32% increase in Instagram. The college continues to use other social media outlets to market various programs to a wide range of audiences, Klemme said.

The board also heard the marketing department is working on the redesign of the website, a new mascot image for the Samsons, along with continually exploring new opportunities to create awareness of college programs and increase enrollment.

"The annual fund drive is going well. Compared to this time last year, we're up about $10,000 and have received $68,700 in unrestricted and restricted funds," said Marczak.

Marczak mentioned that instructor Maria Sokol has joined the Foundation Board of Directors as the faculty representative. Two new annual scholarships have been established - the Philip "Bud" and Angeline Nelson Scholarship and the Dean Pearson Memorial Scholarship. Also, a new endowed scholarship was established by Ashland Industries in memory of Bob Eder.

The foundation recently sponsored prizes for students entering the creative writing contest through the statewide Liberals Arts Network for Development, according to Marczak.

"Two of our students went on to win prizes at the state level - Micaela Camp, of Calumet, won first place in the creative nonfiction category and Charlotte Jones, of Chassell, won second place in poetry. Special thanks were given to Cynthia Brandon-Slocum, English instructor, for spearheading the writing contest for the students," said Marczak.

The trustees approved the resignation of Ashley Paquette, director of Human Resources, effective Feb. 4. "Paquette has been employed at GCC for over 10 years and has provided exemplary service during her tenure," said college president George McNulty.

The board wished Paquette well in her future endeavors and extended their gratitude for her service to GCC. The college will seek a full-time replacement for this position immediately, said the release.

The board holds its regular monthly meetings on the last Tuesday of the month, but has moved the meeting time from 6:30 p.m. to 6 p.m. It meets in the upper level of the Lindquist Student and Conference Center on the Ironwood campus. The July and December meetings will be earlier in the month to avoid holidays and scheduling conflicts.

In other action, the board approved:

-Forslund Building Supply for the materials for the building trades home.