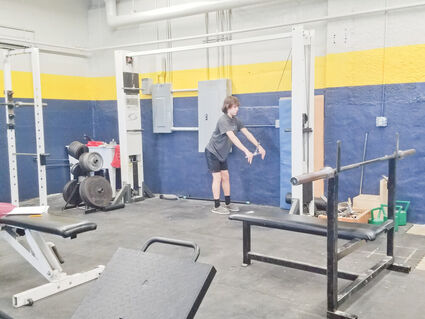 FRESHMAN WYATT Aspinwall works out in the new weightlifting and cardio room at A.D. Johnston Junior-Senior High School on Feb. 3.

Bessemer - Students at A.D. Johnson High School now have a new weightlifting and cardio room. It is open for training before and after school, as well as certain classes.

The new training room is located under the bleachers on the north side of the gymnasium, directly across from its former location, in a room that was the old wood shop and was originally a bus garage many years ago, according to superintendent Dan Niemi.

He explained that the district now offers a Bigger, Faster, Stronger and Team Sports class and that the cardio and weightlifting rooms were on opposite sides of the gym. He said this made it difficult for instructor Nick Heikkila to monitor both locations.

"Really, it was a safety issue to have the cardio over here and the gym and the weight room over there, because one person can't be in thee spots at the same time," said Niemi. "Especially with free weights and then cardio where, they're running on a treadmill. I worried about that. Mr Heikkila worried about that. So we decided to upgrade this room, which is the biggest room and make that the weight room/cardio room."

Niemi said they also relocated Heikkila's office to the room in between the gym and the weightlifting and cardio room to make it easier for Heikkila to monitor both rooms.

Heikkila and his dad gave the room a facelift with a fresh coat of paint over the Christmas break. "It was all white and it was really dingy looking," said Niemi.

The school also purchased a 70-inch TV for the room to allow students to watch workout and exercise videos. He said the room now has enough space that they can do yoga and aerobics classes, as well.

Niemi said the room was a big undertaking.

"We figured we have to invest in our kids. We have to invest in their physical health. It's a class, but its also athletics. We needed a spot and our weight room there was small," said Niemi. "We now have probably the biggest weight room in the western end of the U.P. So we've come a long way and we're giving our kids another opportunity. That's a good thing."

According to Niemi, there has been a lot of interest in the weightlifting and cardio room. He said that on Feb. 2 alone, 22 kids came to use it after school. He said Heikkila is also offering a breakfast club where kids can use it in the morning before school, and reports an average of six to 12 kids.

"We do have interest in it. It is getting used and that's a very good thing. I'm very happy about it," said Niemi.

Students will hold a lift-a-thon as a fundraiser on Feb. 25 to raise money for new rubber flooring. The current rubber flooring from the former space is not large enough to cover the entire room. Niemi estimated the cost at $5,000.

Students will collect donations or pledges relating to the amount they will lift per pound. They will be tested on bench press, deadlift and squat. Pledges are to be turned into Heikkila by March 4.