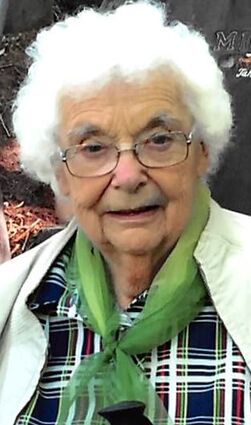 She was born April 9, 1930, to the late Frank and Eva (Archambeau) Formolo at home in Montreal, Wisconsin. Pat's mother and father died while she was in high school, so Pat helped raised her brothers Francis and Eugene until they could be on their own. She graduated from J.E. Murphy High School in Hurley, and was employed by Michigan Bell Telephone Company as a telephone operator. She later worked at the Ironwood Daily Globe for 50 years as a "stuffer," and at Lutey's Flower Shop making flower arrangements.

Pat was a faithful member of Our Lady of Peace Catholic Church and sang with the Resurrection Choir. For LaRosa Sunday, she baked and decorated many cupcakes with roses. She loved music and played clarinet in the Sweet Heart Trio. She also played piano and loved to polka.

She always talked about ice skating on the streets in Montreal, so one year we went to Pat O'Donnell Civic Center to see what she could do. Wow, could she skate! She kept saying: "The ice is so smooth, it's like glass." Our worries of her falling and hurting herself were for nothing. She skated better than us youngsters.

Pat loved to cross country ski at ABR Trails with her daughter-in-law and always notified staff which runs she would be on in case they needed to come and look for her if her car was the last one in the parking lot!

For her 75th birthday, she received a new Schwinn bicycle with coaster brakes as she wore out her previous 1950s style bicycle. She would ride 6-8 miles on the Iron Belle Trail once and sometimes twice a day.

Many hours were spent picking apples and berries (all the while keeping an eye out for bears) and of course baking pies.

Sunday rides were taken to Lake Superior, Copper Falls, Lake of the Clouds, Presque Isle, Weber Lake, and Sunday Lake, to name a few. She enjoyed tent camping with Kay and Allen, and was always up for an adventure.

She was preceded in death by brothers, Francis, Eugene, and James in infancy.

A Mass of Christian Burial will be held at Our Lady of Peace Catholic Church on Friday, Feb. 25, at 11 a.m. with Fr. Binu Joseph as celebrant, preceded by a visitation from 10 a.m. until the time of the Mass.

The family has chosen McKevitt-Patrick Funeral Home of Ironwood to honor Pat's legacy of life. You can leave a condolence or a tribute at mckevittpatrickfuneralhome.com.