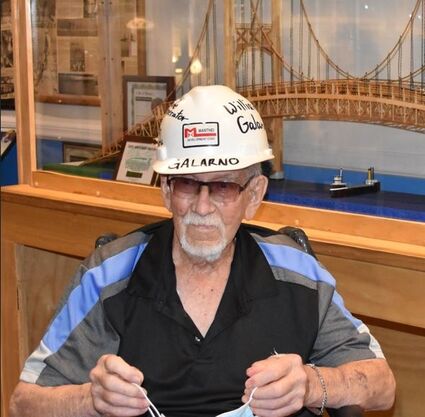 GURNEY, Wis. - William "Bill" Galarno, a longtime resident of Gurney, Wisconsin, passed away on Monday Feb. 21, 2022, where he resided at the home of his daughter Denise and son-in-law Jeff Sprangers in Woodruff.

On Dec. 9, 1950, he married his soulmate Charlotte Youngs. Together they raised a family of eight children.

Bill had many interesting jobs during his life including a diamond driller, a wheel's man on the Great Lakes and a crane operator that helped build the Mackinac Bridge. He also set rocks for the break wall at Saxon Harbor.

After retiring, he spent many hours woodworking. Dad made many beautiful clocks, shelves, trunks and tables. It was always fun to visit and see his latest project, but it was even better when he would say, "I made this one for you."

Dad always planted a big garden to share with his family. He enjoyed deer hunting with his boys, turkey hunting with mom, camping and loved his many pets.

Dad will be greatly missed forever and always. His many stories will be passed along and never forgotten.

No services will be held at this time, a celebration of life is being planned for this spring.