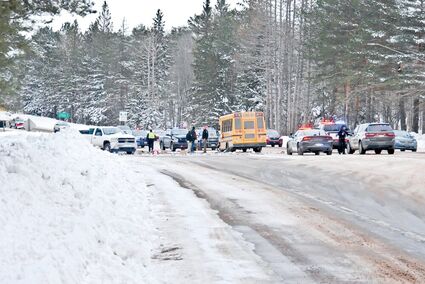 A school bus sits in the middle of U.S. 2 in Ironwood east of Easy Street after being involved in an accident with a pickup truck Thursday afternoon. The bus was carrying students for the Gogebic-Ontonagon Intermediate School District. Three passengers on the bus and the driver of the pickup were taken to the hospital with minor injuries and released, according to authorities. The accident remains under investigation.

IRONWOOD - The Ironwood Public Safety Department was called to the scene of a two-vehicle crash involving a school bus and a pickup truck on Thursday afternoon on U.S. 2 just east of Easy Street in the city.

The school bus, operated by Schilleman Bus Service of Eagle River, Wisconsin, was transporting children for the Gogebic-Ontonagon Intermediate School District at 2:30 p.m. when it collided with a pickup truck.

Four people were transported to Aspirus Ironwood Hospital for minor injuries and released, according to IPSD Director Andrew DiGiorgio. The injured included three passengers on...