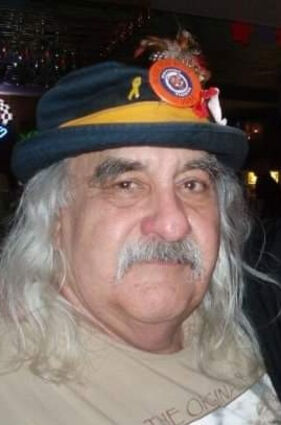 WHITE PINE, Mich. - Kenneth "Cloud" Slipper, age 80, passed away peacefully in his home, sitting on his couch in his boxers on Tuesday afternoon Feb. 22, 2022.

Cloud was born on June 7, 1941 in Wauwatosa, Wisconsin, in Milwaukee County to Kenneth F. Slipper and Ethel (Whiting) Slipper.

He received his GED from White Pine High School in 1983. He spent his earlier years working as a meat cutter in the Milwaukee area, then went on to work for White Pine Copper from 1986 to 1995, when the mine closed. He attended Gogebic Community College in 1997 to 2000 obtaining a degree in business. He worked at the Franki Meat Market until he retired in 2001.

Cloud spent his years living in White Pine, with the love of his life, Lynne Razmus. They moved to White Pine in 1975, got married and started a family. Many of his friends and family knew Cloud as the Music Man. He had a passion for music, and he touched the lives of many people through his music. He was always telling his life stories of his times in Milwaukee and adventures with his wife Lynne to anyone that would listen. "He could make an ordinary day extraordinary by simply sitting back and listening to his stories and wisdom," according to cherished family friend Jennifer Pierpont Wicklund.

Cloud enjoyed the simple things in life: his family, friends and his treasured music collection and of course his Green Bay Packers. In the early days you would always find him at the Konteka with his dearest friends, Tom Repaal and Richard Bozman cheering and yelling for his Packers.

"The best thing Milwaukee ever produced since Pabst. Always fun to talk with, a very distinct philosopher," said family friend Bob Pierpont. He will forever be remembered as a kind and giving man, may he rest in peace.

Cloud is survived by his wife, Lynne; his three children, Amanda, Stevie and David (Helena); his beloved grandchildren, Mekenna Lynne and Elton Cloud (David and Helena); his two sisters, Carolyn Fassel and Colleen Slipper-Bornhofer; and many nieces and nephews.

He was preceded in death by his sisters, Gail (David) Guerrero, Charlotte Delgado and Cindy Clifton; his mother-in-law, Marge Razmus; and father-in-law, Leo Razmus.

The family will be planning a celebration of life for Cloud to take place this summer. In lieu of flowers, a go fund me page is being established to help with final arrangements.