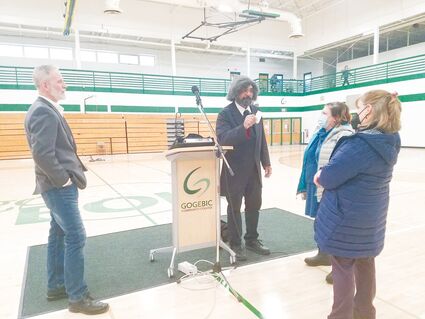 GCC PRESIDENT George McNulty, left, looks on as board member Sue Beals, from right, and her daughter Heather Nyman, speak with Steve Cole after his performance as the 19th-century abolitionist Frederick Douglass in the Lindquist Student Conference Center gymnasium on Monday morning.

IRONWOOD - Gogebic Community College, in collaboration with the Ironwood Diversity, Equity and Inclusion Group, celebrated Black History Month with a powerful and passionate performance by Frederick Douglass impersonator Steve Cole on Monday, that left at least one student in tears.

Douglass was a former slave that escaped slavery and later bought his freedom for $712. He is remembered as a prominent abolitionist and journalist.

Cole recited a Douglass speech condeming slavery and racism, while in character as Douglass to a small audience at the L...