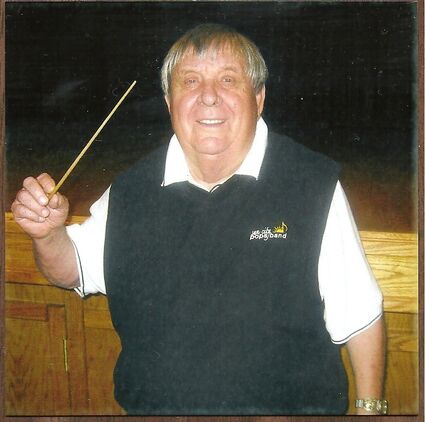 He discovered an early passion for music on a school-owned tuba. His talent led to a scholarship to St. Olaf College in Northfield, Minnesota, where he graduated in 1955 with a degree in music education. He then served three years in the U.S. Army, playing tuba in the band.

In 1958, he married Elizabeth, even though her mother warned her to stay away from musicians. They had two children, David and Kimberly. The family settled in Hibbing, Minnesota, on Gray Drive. The home was filled with music and a furry friend or two. His neighbors, the Plese and Maciej families, continue to be close friends of the family.

Elizabeth and David retired to Sun City, where he continued to be active in music. He was the conductor of the 100-piece Sun City Pops Band from 2000 to 2009. After he suffered hearing loss, he donated his tuba to a local Arizona school hoping to spark the same passion he had developed as a child.

David cherished his bride of 64 years. He always knew he had landed a catch. The two of them enjoyed the simple retirement life; going out for breakfast or coffee with friends, attending church or music events and making the occasional casino run. He picked fresh flowers for her from the yard each week and would always put her needs before his. In the hospital, he even asked the surgeon to take a look at her bad hip before fixing his. He was very proud of David Jr.'s 28-year Army career and rise to rank of lieutenant colonel. Kimberly gave up attempting to correct him when he told friends she ran Wells Fargo.

David had a strong belief in God and served as both an elder and trustee at the Fountain of Life Lutheran Church in Sun City. Even later in life, when faced with numerous health challenges, he never questioned God's master plan. His belief in a higher power helped him maintain a 43-year friendship with Bill W.

Most important to David was his large extended family. Summers were spent at Black River Harbor and Little Girls Point. When he was with the people he loved, he always had a twinkle in his eye, a grin on his face and a one liner at the ready. Nicknamed Tuffy, he and his brothers could generally be found tinkering on cars or working on projects at Wimpy's cabin. The family often congregated at Flo and Joe's home for traditional Yooper feasts.

David is survived by his wife, Elizabeth; children, David and Kimberly; sisters, Ady and Susan; his brother, Norbert (Luise); and numerous nieces, nephews, cousins and friends.

Tuffy is now in Heaven with his parents, Susanna and William; and siblings Carl, Eddie, Arnie, Wimpy, Edith, Alice, Helen, Nancy, Cliff, Flo and Joanie. What a reunion this must be. I'm sure the sisters have prepared a feast, his brothers have the sauna fired up, and God already has a few gigs scheduled.

We would like to thank David's "adopted" Arizona children and neighbors, Dave and Barb Hammarsten, for keeping a watchful eye on our parents and supporting us during this very difficult time. Dad cherished his friendship with them. We would also like to thank Surprise Hospice of the Valley for their compassionate end of life care.

Consistent with his wishes, David's body has been donated to science. Details regarding a celebration of life to follow. In lieu of flowers, the family would love donations to support the Hibbing High School Band, ISD 701 Business Office, 800 East 21st St., Hibbing, MN 55746.