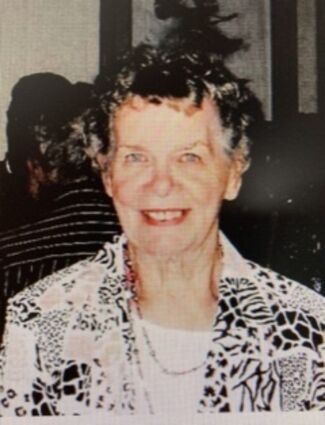 ONTONAGON, Mich. - Geraldine Miller, age 89 of Ontonagon passed away on March 6, 2022, at Gogebic Medical Care Facility in Wakefield, where she had been a resident since October 2021. She left peacefully with her children by her side.

Geri was born on May 7, 1932, in New Boston, Michigan, to Charles and Verna Townsend. Her father was a jack-of-all-trades, so she lived in many different towns throughout her childhood. One of those towns was Ontonagon, where she met her future husband, John Miller. John and Geri were married on Aug. 20, 1949, and soon started their family of four children, James, Steve, Jean and Diane.

Geri was a wonderful homemaker and mother. John and Geri ran the Paul Bunyan Teen Center for several years down the street from their home. They gave the local teens a place to gather for good, clean fun. The jukebox was always playing and the dance floor was always full and hopping. Those teens are grown and still talk fondly of those fun filled times at Paul Bunyan's.

Later on, Geri attended Gogebic Community College and attained a degree in dietary management, later working at Long Term and Maple Manor. She was a member of the Eagles Club and also worked there as a secretary and as a bartender. She enjoyed being a member of the Kitchen Band and dressing up and entertaining people.

Geri was a woman of many talents, decorating beautiful wedding and birthday cakes for family and friends. Her family always looked forward to all of her cooking, especially her turkey dinners on holidays. She loved having family summer picnics in her back yard, surrounded by family with lots of grandchildren running around. We all enjoyed her beautiful rose garden that she tended to and was so proud of.

She enjoyed traveling to different states, but especially enjoyed her bus trips to Branson, Missouri. She and her special friend, Malcolm Penegor, could be found most weekends dancing at the South Range Eagles Club. They enjoyed each other's company for over 20 years. Geri was a wonderful and loving mother, mother-in-law and grandmother to us all and she leaves a large void in our Miller family. She will forever be missed.

Funeral services will be at Cane Funeral Home in Ontonagon on Saturday, March 19. Visitation is from 10 a.m. to 11 a.m., with service following at 11 a.m., officiated by Jim Jessup.

A luncheon will be held immediately following at the Eagles Club in Ontonagon.