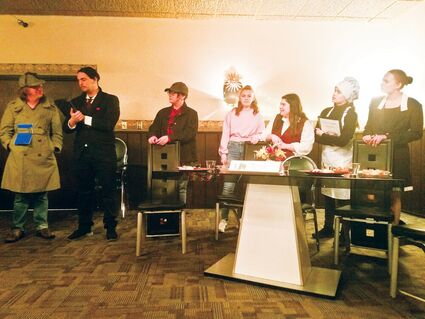 DETECTIVE HARRIS, played by Ironwood senior Alex Hunt speaks with the Maitre'd, played by Hurley senior Jaxon Sokul, after he is called in to solve the murder of Rosemary St. John as the rest of the cast ponders the situation during the Awkward Stage Drama Club performance of "Cafe Murder" on Tuesday night at the Golden Dragon Restaurant in Ironwood. Pictured from left are Hunt, Sokul, Emily Ramee, a senior at the alternative school, Hannah Sandquist, of Wakefield-Marenisco, Haley Agee, of Ironwood, and Kara Dums of Wakefield-Marenisco.

IRONWOOD - The Awkward Stage Drama Club returned to the stage Tuesday night, after a nearly two-year intermission, for the first of three performances of "Cafe Murder" at the Golden Dragon Restaurant in Ironwood.

The light-hearted dinner theatre murder mystery comedy tells the story of Rosemary St. John, an annoying girl with a water allergy who is murdered during her birthday party at a restaurant. Through the comedic play, the actors interacted with the audience.

The play is set at a dinner table, so the cast was stationed among the audience at...