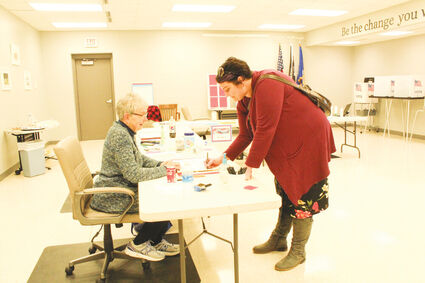 City of Montreal Councilmember Maleah Cummings, right, fills out paperwork before casting her vote in the Iron County 2022 general elections at the Montreal City Hall on Tuesday. Poll worker Barbara Valle sits behind the table.

The winners of the Iron County 2022 general election were announced on Tuesday evening following voting earlier in the day. The election determined who will serve as county supervisors for the next two years, in addition to members of the Hurley and Montreal city councils, and the Hurley and Mercer school boards.

The only contested position for a county board seat was in District 12, where voters had to choose between incumbent Opal Roberts and Hank Joustra, both of Mercer. Roberts held her seat with 83 votes while Joustra received 49 votes.