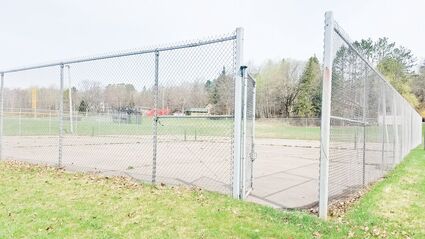 The Eddy Park Tennis Courts, seen here on Thursday morning, which have not been used in years were set to be used as the new Wakefield Skate Park at the end of this month, but now Wakefield pickleball players have asked to be able to share the space.

WAKEFIELD - After months of anticipation, planning and fundraising to build a skate park on the Eddy Park tennis courts by middle school students at the Wakefield-Marenisco School, a monkey wrench has now been thrown in, which may alter their plans within weeks of opening.

Area pickleball players Lorraine Mussatti and Julie Hautala made a request to the Wakefield city council on Monday for permission to create two pickleball courts on the same tennis courts.

The women said they had measured the area and could effectively share the space with the...